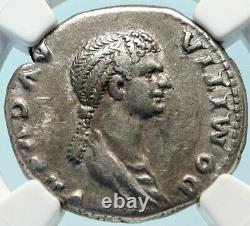 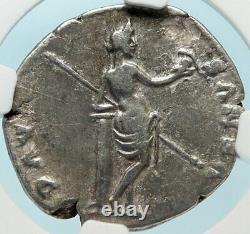 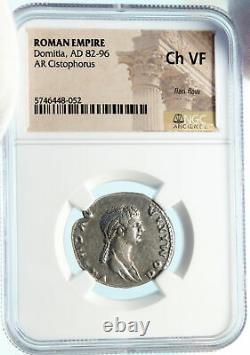 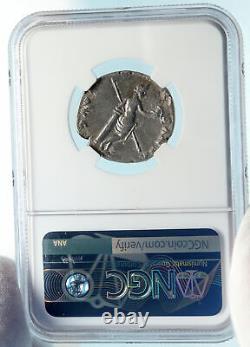 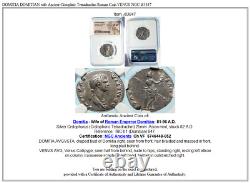 VENVS AVG, Venus Callipyge, seen half from behind, nude to hips, standing right, resting left elbow on column, transverse scepter in left hand, helmet in outstretched right. Venus was a Roman goddess principally associated with love, beauty and fertility, who played a key role in many Roman religious festivals and myths. From the third century BC, the increasing Hellenization of Roman upper classes identified her as the equivalent of the Greek goddess Aphrodite.

Her cult began in Ardea and Lavinium, Latium. On August 15, 293 BC, her oldest known temple was dedicated, and August 18 became a festival called the Vinalia Rustica. After Rome's defeat at the Battle of Lake Trasimene in the opening episodes of the Second Punic War, the Sibylline oracle recommended the importation of the Sicillian Venus of Eryx; a temple to her was dedicated on the Capitoline Hill in 217 BC: a second temple to her was dedicated in 181 BC. Venus seems to have played a part in household or private religion of some Romans. Julius Caesar claimed her as an ancestor (Venus Genetrix); possibly a long-standing family tradition, certainly one adopted as such by his heir Augustus. Venus statuettes have been found in quite ordinary household shrines (lararia). In fiction, Petronius places one among the Lares of the freedman Trimalchio's household shrine.

AD 130 was an Empress of Rome and wife to the Roman Emperor Domitian. She was the youngest daughter of the general and consul Gnaeus Domitius Corbulo. Domitia divorced her first husband Lucius Aelius Lamia in order to marry Domitian in 71.

The marriage produced only one son, whose early death is believed to have been the cause of temporary rift between Domitia and her husband in 83. She became Empress of Rome upon Domitian's accession in 81, and remained so until his assassination in 96. She is believed to have died sometime between 126 and 130. Domitia Longina was born sometime between 50 and 55, as the youngest daughter of Gnaeus Domitius Corbulo and Cassia Longina.

Through her mother (a great-great-great granddaughter of Augustus), Domitia Longina was a direct descendant of Augustus Caesar and one of the last remaining members of the Julian lineage. Her paternal aunt was Milonia Caesonia, Roman Empress to Caligula. Her elder sister, Domitia Corbula, married the senator Lucius Annius Vinicianus. Domitia's father Corbulo had been one of Rome's most respected Senators and generals, serving as consul under Caligula, and conducting military campaigns in Germania and Parthia under Claudius and Nero.

Following the failed Pisonian conspiracy against Emperor Nero in 65 however, Corbulo was disgraced when his family was brought in connection to the conspirators. Corbulo himself was forced to commit suicide, while Annius Vicinianus and his brother Annius Pollio, were executed in the ensueing purges. Little is known about the life of Domitia before her marriage to Domitian, but sometime before 70, Domitia was married to Lucius Aelius Plautius Lamia Aelianus, a man of senatorial rank. Reign of Vespasian and Titus.

Following Nero's suicide on June 9, 68, the Roman Empire plunged into a year long civil war known as the Year of the Four Emperors, which saw the successive rise and fall of the Emperors Galba, Otho and Vitellius. The crisis came to an end with the accession of Vespasian, who re-established peace in the Empire and founded the short-lived Flavian dynasty. In 71, Vespasian attempted to arrange a dynastic marriage between his youngest son Domitian, and the daughter of his eldest son Titus, Julia Flavia. By this time however, Domitian had already met and fallen in love with Domitia Longina, and managed to persuade Lamia to divorce her, so that Domitian could marry her himself. Despite its initial recklessness, the alliance was very prestigious for both families. The new marriage rehabilitated Corbulo's family, while serving the broader Flavian propaganda of the time, which sought to diminish Vespasian's political success under the less reputable emperors of the Julio-Claudian dynasty. Instead connections to Claudius and Britannicus were emphasised, and Nero's victims, or those otherwise disadvantaged by him, rehabilitated.

In 73, Domitia and Domitian's only attested son was born. It is not known what the boy's name was, but he died in childhood sometime between 77 and 81. During this time, Domitian's role in the Flavian government was largely ceremonial. While his elder brother Titus shared almost equal powers with his father, Domitian was left with honours but no responsibilities. This situation remained unchanged when Titus succeeded Vespasian as Emperor on June 23, 79, leading both ancient and modern authors to suggest a mutual animosity between the two brothers.

In 80, Titus granted a suffect consulship to Domitia's former husband Aelius Lamia, according to Gsell as a personal insult against Domitian. On another occasion, when Titus urged Lamia to marry again, Lamia asked whether "he too was looking for a wife". After barely two years in office, Titus unexpectedly died of brain fever on September 13, 81. His last words were reported to have been: "I have made but one mistake". The contemporary historian Suetonius speculated on the possible involvement of Domitian in his brother's death, attributing his final words to a popular rumour of the time, which held that Titus had carried on an affair with Domitia Longina.

However even he dismisses the story as highly unlikely. On September 14, the Roman Senate confirmed Domitian as Titus' successor, granting tribunician power, the office of Pontifex Maximus, and the titles of Augustus, and Pater Patriae. Consequently, Domitia Longina became Empress of Rome.

Shortly following his accession as Emperor, Domitian bestowed the honorific title of Augusta upon Domitia, while their late son was deified. Both appeared on Domitian's coinage during this time.

Nevertheless, the marriage appears to have faced a significant crisis in 83. For reasons unknown, Domitian briefly exiled Domitia, and then soon recalled her, either out of love or amidst rumours he was carrying on a relationship with his niece Julia Flavia. According to Suetonius, Domitia was exiled because of an affair with a famous actor named Paris. When Domitian found out, he allegedly murdered Paris in the street, and promptly divorced his wife.

Suetonius further adds that, once Domitia was exiled, Domitian took Julia as his mistress, who later died during a failed abortion. Modern historians consider this highly implausible however, noting that many of these stories were propagated by hostile senatorial authors, who condemned Domitian as a tyrant after his death. Malicious rumours, such as those concerning Domitia's alleged infidelity, were eagerly repeated, and used to highlight the hypocrisy of a ruler publicly preaching a return to Augustan morals, while privately indulging in excesses and presiding over a corrupt court. Domitian did exile his wife, but Jones argues that most likely he did so for her failure to produce an heir.

Nevertheless, rumours regarding Domitia's alleged misconduct with Paris circulated even in Domitian's time, and he did not take insults directed at his marriage lightly. Not long after his accession, Aelius Lamia was put to death for the joking remarks made earlier during the reign of Titus. In 93, a son of Helvidius Priscus was executed for having composed a farce satirizing Domitian's separation from his wife. Stories of Domitian's affair with Julia were likely an invention of post-Domitianic writers however.

She died a natural death, and was subsequently deified by Domitian. Little is known of Domitia's precise activities as Empress, or how much influence she wielded in Domitian's government, but it seems her role was largely limited to ceremonial appearances. From Suetonius, we know that she at least accompanied the Emperor to the theatre, while the Jewish writer Josephus speaks of benefits he received from her. Despite the crisis of 83, their relationship appears to have been happy.

Domitian never married another woman in his life. On September 18, 96, Domitian was assassinated in a palace conspiracy organized by court officials. His body was carried away on a common bier, and unceremoniously cremated by his nurse Phyllis, who mingled the ashes with those of his niece Julia at the Flavian temple. The same day, he was succeeded by his friend and advisor, Marcus Cocceius Nerva.

Ancient sources have implicated Domitia in the conspiracy against Domitian, either by direct involvement, or advance awareness of the assassination. The historian Cassius Dio, writing more than a century after the assassination, claimed that Domitia chanced upon a list of courtiers Domitian intended to put to death, and passed the information to his chamberlain Parthenius. The story is most likely apocryphal however, with Herodian attributing a similar tale to the assassination of Commodus. According to Jones, the evidence suggests that Domitia remained devoted to Domitian, even after his death. Twenty-five years after her husband's assassination, and despite the fact that his memory had been damned by the Senate, she still referred to herself as "Domitia, wife of Domitian".