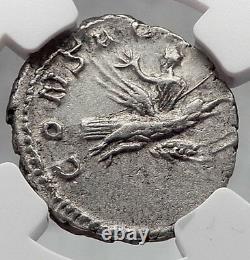 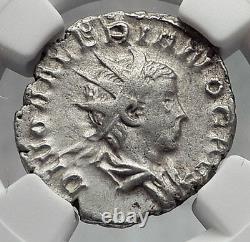 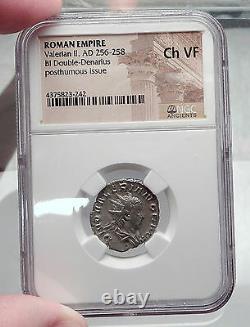 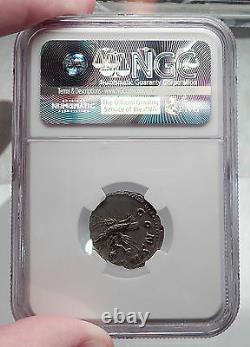 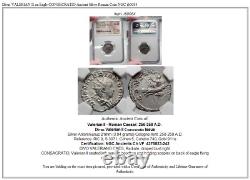 CONSACRATIO, Valerian II seated left, waving goodbye and holding scepter on back of eagle flying right, bearing him to heaven. Consecration Ceremony in Ancient Rome. The ceremony of consecration was very solemn and imposing. After the body had been clothed in the habiliments of death, it was placed on a bed of ivory; young men, chosen from the equestrian order, bore it on their shoulders to the pile.

The Rogus, or Funeral Pile, is described by Dion, as a structure in the form of a turret, with three stories, of ivory and gold, and ornamented with statues. Herodian describes it as a mass of quadrangular shape, filled at the bottom with combustibles, on which again a second tier was placed of similar form and appearance, but narrower and furnished with openings; to this a third and a fourth were added, each gradually diminishing in size, till the whole resembled a watch-tower. The corpse being then introduced into the second layer or story, it was surrounded with aromatics and precious balms. The usual ceremonies being completed, a torch was applied, and the mass was consumed. After this apotheosis, the deceased emperor or empress had temples, altars, and priests dedicated to his or her honour, and the same worship was paid to the defunct, as paganism rendered to its gods and goddesses; whilst the Augusti, or Augustae, were thenceforth called DIVI and DIVAE.

The form of the rogus, described as above by ancient writers, is brought to our view, with remarkable clearness, on numerous coins. This is a Julia Maesa, discovered at Rome; respecting which its then possessor, Viscount Ennius, a renowned antiquary, wrote to Garampi, papal nuncio at Vienna, that it is so well executed, and in such high preservation, that in the second layer of the funeral pile, the corpse of the empress is seen recumbent on a bed; a minute particular, never before distinguished in the monetal representation of these funeral structures. Publius Licinius Cornelius Valerianus (died 257 or 258), also known as Valerian II, was the eldest son of Roman Emperor Gallienus and Augusta Cornelia Salonina who was of Greek origin and grandson of the Emperor Valerian who was of a noble and traditional senatorial family.

Shortly after his acclamation as Emperor (Augustus) Valerian made Gallienus his co-Emperor and his grandson, Valerian, Caesar, in 256. (For a discussion of the dynastic politics that motivated this process, see the related article on Saloninus). The young Caesar was then established in Sirmium to represent the Licinius family in the government of the troubled Illyrian provinces while Gallienus transferred his attentions to Germany to deal with barbarian incursions into Gaul.

Because of his youth (he was probably no more than fifteen at the time), Valerian was put under the guardianship of Ingenuus, who seems to have held an extraordinary command as governor of the Illyrian provinces, i. Upper and Lower Pannonia and Upper and Lower Moesia.

It is reported that Salonina was not happy with this arrangement. Although she could not publicly dispute the decisions of Valerian, the pater patriae which had been formally agreed by her husband, Gallienus, she suspected Ingenuus's motives and asked an officer called Valentinus, otherwise unknown, to keep an eye on him. Despite this precaution, Valerian died in late 257-early 258 in circumstances sufficiently suspicious for Gallienus to attempt to demote Ingenuus.

It was this action that sparked the attempted usurpation of the Empire by Ingenuus, who had widespread support among the Illyrian garrisons and the provincial establishment. As in case of his brother, Saloninus, who was later made Caesar in Gaul, the little we know of Valerian's short reign in Illyria is indicative of the chaotic situation that prevailed on the northern frontiers of the Empire under Valerian and Gallienus. It seems to show that the mere presence of a member of the Imperial House in a troubled region was not sufficient to assuage local fears of being neglected by the distant Emperor. The local Caesar had to wield undisputed authority in his region and command the resources and the experience to deal with the internal and external threats to its security.

Additionally, the coin is inside it's own protective coin flip (holder), with a 2x2 inch description of the coin matching the individual number on the COA. Whether your goal is to collect or give the item as a gift, coins presented like this could be more prized and valued higher than items that were not given such care and attention to. Is there a number I can call you with questions about my order? When should I leave feedback?

Visit the "Guide on How to Use My Store" for on an overview about using my store, with additional information and links to all other parts of my store which may include educational information on topics you are looking for. You may also want to do a YouTube search for the term "ancient coin collecting" for educational videos on this topic. This item is in the category "Coins & Paper Money\Coins: Ancient\Roman: Imperial (27 BC-476 AD)". The seller is "highrating_lowprice" and is located in this country: US.