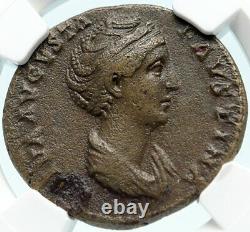 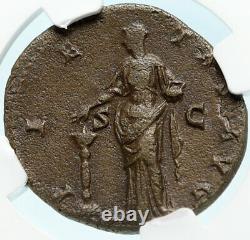 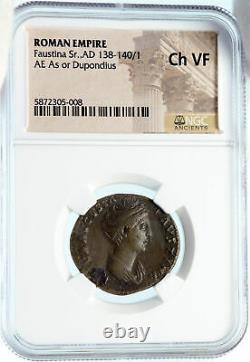 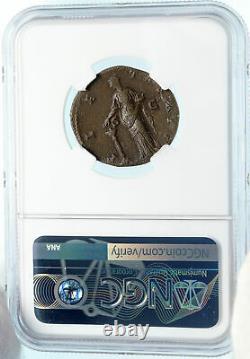 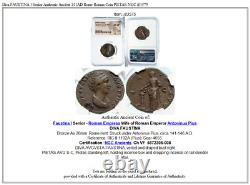 Item: i83575 Authentic Ancient Coin of. Wife of Roman Emperor Antoninus Pius. DIVA FAUSTINA Bronze As 26mm Rome mint. Struck under Antoninus Pius, circa 141-146 A. Reference: RIC III 1192A (Pius); Sear 4655 Certification: NGC Ancients. Ch VF 5872305-008 DIVA AVGVSTA FAVSTINA, veiled and draped bust right. PIETAS AVG S-C, Pietas standing left, holding incense box and dropping incense on tall slender altar. In Roman mythology, Pietas was the goddess of duty to one's state, gods and family and a personification of the Roman virtue of pietas. One of the di indigetes, her main temple was a 2nd century BC one in the Forum Holitorium. This goddess was often depicted on the reverses of Roman Imperial coins with women of the imperial family on the obverse, as an appropriate virtue to be attributed to them (eg Flavia Maximiana Theodora, right). The imperial women might even appear in the goddess's guise (eg Livia here and Salonina Matidia here). Annia Galeria Faustina, more familiarly referred to as Faustina the Elder (Latin: Faustina Major ; born September 21 about 100, died October or November 140), was a Roman Empress and wife of Roman Emperor Antoninus Pius.

Her paternal grandfather had the same name as her father and her maternal grandparents possibly were Salonina Matidia (niece of Roman Emperor Trajan) and suffect consul Lucius Scribonius Libo Rupilius Frugi Bonus. Faustina was born and raised in Rome. As a private citizen, she married Antoninus Pius between 110 and 115.

His name appears on a Greek Imperial coin. Aurelia Fadilla (died in 135); she married Aelius Lamia Silvanus or Syllanus. She appears to have had no children with her husband and her sepulchral inscription has been found in Italy. Annia Galeria Faustina Minor or Faustina the Younger (between 125-130-175), a future Roman Empress; she married her maternal cousin, future Roman Emperor Marcus Aurelius.

She was the only child who survived to adulthood. On July 10, 138, her uncle emperor Hadrian had died and her husband became the new emperor.

Antoninus was Hadrian's adopted son and heir. Faustina became Roman Empress and the senate accorded her the title of Augusta.

Faustina as an empress was well respected and this beautiful woman was renowned for her wisdom. The Augustan History impugned her character, criticizing her as having "excessive frankness" and "levity". However, this doesn't appear to be the case with her character.

Throughout her life, Faustina as a private citizen and an empress was involved in assisting with charities, assisting the poor and sponsoring and assisting in the education of Roman children, particularly of Roman girls. She can be viewed as one of the most moral, stable and respected empresses in the history of the Roman Empire. When Faustina died, Antoninus was in complete mourning for Faustina. Antoninus did the following in memory of his loving wife.

Deified her as a goddess (her apotheosis was portrayed on an honorary column). Had a temple built in the Roman Forum in her name, with priestesses in the temple. Had various coins with her portrait struck in her honor. These coins were inscribed DIVA FAVSTINA ("Divine Faustina") and were elaborately decorated. Founded a charity called Puellae Faustinianae or Girls of Faustina, which assisted orphaned girls.

Created a new alimenta (see Grain supply to the city of Rome). In 2008, archaeologists digging at the ancient site of Sagalassos in Turkey discovered a colossal marble head which is believed to be that of Faustina.

How and where do I learn more about collecting ancient coins? Visit the Guide on How to Use My Store. For on an overview about using my store, with additional information and links to all other parts of my store which may include educational information on topics you are looking for. This item is in the category "Coins & Paper Money\Coins: Ancient\Roman: Imperial (27 BC-476 AD)". The seller is "highrating_lowprice" and is located in this country: US.