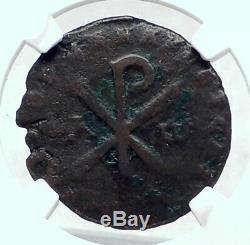 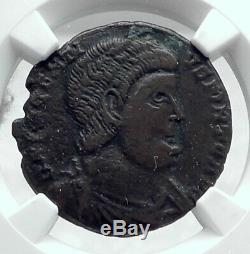 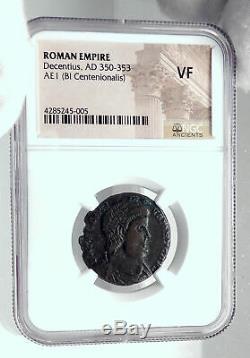 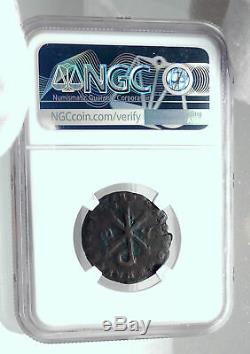 VF 4285245-005 DN DECENTIVS FORT CAES, bare-headed, draped and cuirassed bust right. SALVS DD NN AVG ET CAES, Large Chi-Rho flanked by A (alpha) and w (omega); mintmark TRS in exergue below. The Chi-Rho is the monogram of Jesus Christ, also known as a Christogram. The A and W on the left represent the Alpha and Omega which Christ was described as in the book of Revelations.

The Chi Rho is one of the earliest forms of christogram, and is used by some Christians. It is formed by superimposing the first two (capital) letters chi and rho of the Greek word " " = KR istos = Christ in such a way to produce the monogram. Although not technically a Christian cross, the Chi-Rho invokes the authority of Jesus, as well as symbolising his status as the Christ. The Chi-Rho symbol was also used by pagan Greek scribes to mark, in the margin, a particularly valuable or relevant passage; the combined letters Chi and Rho standing for chrston, meaning good. Some coins of Ptolemy III Euergetes r.

246-222 BC were marked with a Chi-Rho. The Chi-Rho symbol was used by the Roman emperor Constantine I r. 306-337 as part of a military standard (vexillum), Constantine's standard was known as the Labarum.

Early symbols similar to the Chi Rho were the Staurogram and the IX monogram . Magnus Decentius (died 18 August 353) was a usurper of the Western Roman Empire against emperor Constantius II.

American scholar Michael DiMaio speculates that Decentius possibly was the brother of Magnentius, who had revolted against Constantius on 18 January 350. Magnentius elevated Decentius as Caesar by him that winter, to oversee the defence of Gaul and the Rhine frontier. He was appointed consul ordinarius in 352. When Magnentius was defeated by Constantius at the Battle of Mons Seleucus and committed suicide, Decentius, who was leading reinforcements, hanged himself at Senonae. World-renowned expert numismatist, enthusiast, author and dealer in authentic ancient Greek, ancient Roman, ancient Byzantine, world coins & more.

Whether your goal is to collect or give the item as a gift, coins presented like this could be more prized and valued higher than items that were not given such care and attention to. When should I leave feedback? Please don't leave any negative feedbacks, as it happens sometimes that people rush to leave feedback before letting sufficient time for their order to arrive. The matter of fact is that any issues can be resolved, as reputation is most important to me. My goal is to provide superior products and quality of service. How and where do I learn more about collecting ancient coins? Visit the Guide on How to Use My Store. For on an overview about using my store, with additional information and links to all other parts of my store which may include educational information on topics you are looking for. The item "DECENTIUS Genuine Ancient 351AD Roman Coin JESUS Chi-Rho Christogram NGC i81331" is in sale since Wednesday, November 6, 2019. This item is in the category "Coins & Paper Money\Coins\ Ancient\Roman\ Imperial (27 BC-476 AD)". The seller is "highrating_lowprice" and is located in Rego Park, New York. This item can be shipped worldwide.