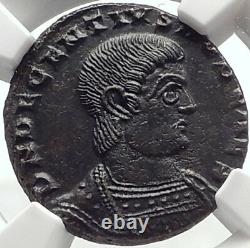 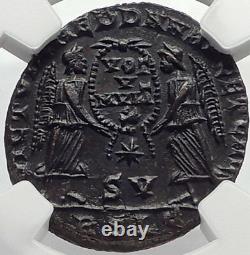 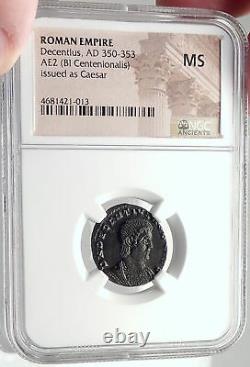 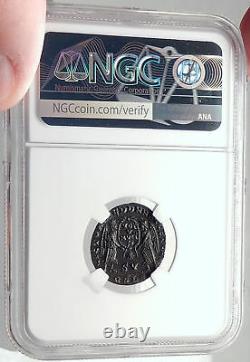 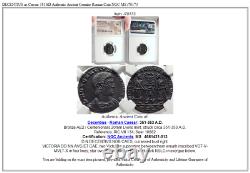 Item: i70173 Authentic Ancient Coin of. Bronze AE2 / Centenionalis 20mm Lyons mint, struck circa 351-353 A. Reference: RIC VIII 134; Sear 18882 Certification: NGC Ancients. MS 4681421-013 D N DECENTIVS NOB CAES, cuirassed bust right. VICTORIA DD NN AVG ET CAE, two Victories supporting between them wreath inscribed VOT-V-MVLT-X in four lines; star over SV in lower centre; mintmark RSLG in exergue below. In ancient Roman religion, Victoria or Victory was the personified goddess of victory. She is the Roman equivalent of the Greek goddess Nike, and was associated with Bellona. She was adapted from the Sabine agricultural goddess Vacuna and had a temple on the Palatine Hill. The goddess Vica Pota was also sometimes identified with Victoria.

Unlike the Greek Nike , the goddess Victoria (Latin for "victory") was a major part of Roman society. Multiple temples were erected in her honor. When her statue was removed in 382 CE by Emperor Gratianus there was much anger in Rome. She was normally worshiped by triumphant generals returning from war.

She is often seen with or in a chariot, as in the late 18th-century sculpture representing Victory in a quadriga on the Brandenburg Gate in Berlin, Germany; "Il Vittoriano" in Rome has two. Winged figures, very often in pairs, representing victory and referred to as "victories", were common in Roman official iconography, typically hovering high in a composition, and often filling spaces in spandrels or other gaps in architecture.

These represent the spirit of victory rather than the goddess herself. They continued to appear after Christianization of the Empire, and slowly mutated into Christian angels. Magnus Decentius (died 18 August 353) was a usurper of the Western Roman Empire against emperor Constantius II.

American scholar Michael DiMaio speculates that Decentius possibly was the brother of Magnentius, who had revolted against Constantius on 18 January 350. Magnentius elevated Decentius as Caesar by him that winter, to oversee the defence of Gaul and the Rhine frontier.

He was appointed consul ordinarius in 352. When Magnentius was defeated by Constantius at the Battle of Mons Seleucus and committed suicide, Decentius, who was leading reinforcements, hanged himself at Senonae. World-renowned expert numismatist, enthusiast, author and dealer in authentic ancient Greek, ancient Roman, ancient Byzantine, world coins & more. Ilya Zlobin is an independent individual who has a passion for coin collecting, research and understanding the importance of the historical context and significance all coins and objects represent. Send me a message about this and I can update your invoice should you want this method.

Getting your order to you, quickly and securely is a top priority and is taken seriously here. Great care is taken in packaging and mailing every item securely and quickly. What is a certificate of authenticity and what guarantees do you give that the item is authentic? You will be very happy with what you get with the COA; a professional presentation of the coin, with all of the relevant information and a picture of the coin you saw in the listing. Additionally, the coin is inside it's own protective coin flip (holder), with a 2x2 inch description of the coin matching the individual number on the COA. Whether your goal is to collect or give the item as a gift, coins presented like this could be more prized and valued higher than items that were not given such care and attention to. When should I leave feedback? Please don't leave any negative feedbacks, as it happens sometimes that people rush to leave feedback before letting sufficient time for their order to arrive. The matter of fact is that any issues can be resolved, as reputation is most important to me. My goal is to provide superior products and quality of service. How and where do I learn more about collecting ancient coins?

The item "DECENTIUS as Caesar 351AD Authentic Ancient Genuine Roman Coin NGC MS i70173" is in sale since Thursday, June 28, 2018. This item is in the category "Coins & Paper Money\Coins\ Ancient\Roman\ Imperial (27 BC-476 AD)". The seller is "highrating_lowprice" and is located in Rego Park, New York. This item can be shipped worldwide.