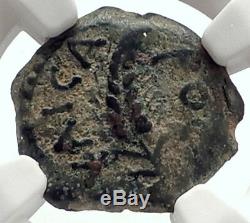 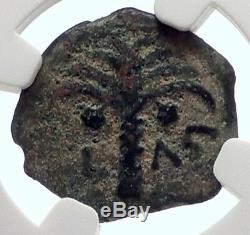 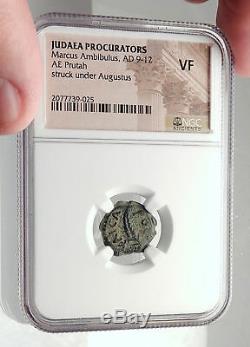 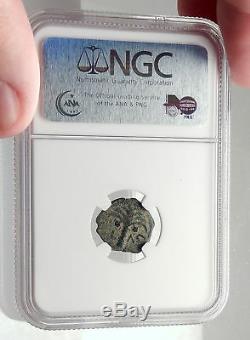 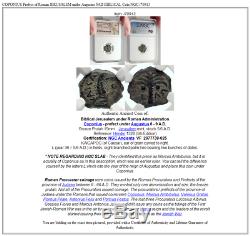 In fields; eight-branched palm tree bearing two bunches of dates. NOTE REGARDING NGC SLAB - They identified this piece as Marcus Ambibulus, but it is actually of Coponius as in this description, which was an earlier ruler. You can tell the difference yourself by the letters L which cite the year of the reign of Augustus and place this coin under Coponius. Roman Procurator coinage were coins issued by the Roman Procurators and Prefects of the province of Judaea. Between 6 - 66 A. They minted only one denomination and size, the bronze prutah. Not all of the Procurators issued coinage. The procurators / prefects of the province of Judaea under the Romans that issued coins were Coponius. The last three Procurators Lucceius Albinus, Gessius Florus and Marcus Antonius Julianus didn't issue any coins as the tidings of the First Jewish-Roman War was in the air brewing during emperor Nero's. Reign and the leaders of the revolt started issuing their own coins, for what is known as the Jewish War. Prutah (Hebrew:) is a word borrowed from the Mishnah and the Talmud, in which it means "a coin of smaller value". The word was probably derived originally from an Aramaic word with the same meaning. The prutah was an ancient copper Jewish coin with low value.

A loaf of bread in ancient times was worth about 10 prutot (plural of prutah). One prutah was also worth two lepta (singular lepton), which was the smallest denomination minted by the Hasmonean and Herodian Dynasty kings. Prutot were also minted by the Roman Procurators of the Province of Judea, and later were minted by the Jews during the First Jewish Revolt (sometimes called'Masada coins'). Coponius was the first governor (Prefect) of Iudaea province, from 6-9 A.

Coponius was the first Roman Prefect of Judaea, being appointed in 6 AD when Herod Archelaus, the son of Herod the Great, was deposed and banished to Gaul by Augustus. He was, like the Prefects who succeeded him, of knightly rank, and "had the power of life and death". Coponius depicted the palm tree bearing two bunches of dates on his coinage, which previously had appeared only on extremely rare coins of Herod Antipas.

The palm tree design was later used to represent Judaea on coins issued by the Jews during the First and Second Revolts, as well as later Roman-issued Judaean-related pieces. The obverse of Coponius's coins show an ear of barley.

The representation of palm trees and barley was done out of sensitivity to Jewish belief not to depict a living creature, and especially not a human being, on their coinage; hence, there is no portrait of the Emperor Augustus on these coins. However, the inscriptions on the coins clearly proclaim that Judaea was occupied by Imperial Rome; hence, the Greek letters surrounding the barley read: [K]aisa-ros ["of Caesar"] with the date, also in Greek letters, under the palm. During his administration occurred the revolt of Judas the Galilean, the cause of which was not so much the personality of Coponius as the introduction of Roman soldiers. Owing to the reconstruction of the province of Judea then in progress, the census was being taken by Quirinius, which was a further cause of offence. Coponius was recalled to Rome, and replaced by Marcus Ambibulus.

Probably it is on account of this occurrence that one door of the Temple bore the name of "door of Coponius". Regarding the personal attitude of Coponius toward the Jews nothing definite is known.

Prefect from the Latin praefectus , substantive adjectival form of praeficere : "put in front", i. In charge is a magisterial title of varying definition, but which, basically, refers to the leader of an administrative area. A prefect's office, department, or area of control is called a prefecture, but in various post-Roman empire cases there is a prefect without a prefecture or vice versa. The words "prefect" and "prefecture" are also used, more or less conventionally, to render analogous words in other languages, especially Romance languages. Praefectus , often with a further qualification, was the formal title of many, fairly low to high-ranking, military or civil officials in the Roman Empire, whose authority was not embodied in their person (as it was with elected Magistrates) but conferred by delegation from a higher authority. They did have some authority in their prefecture such as controlling prisons and in civil administration. The Roman province of Judea (Hebrew: , Standard Yehuda Tiberian Yehûh ; Arabic: ; Greek: Ioudaia ; Latin: Idaea), sometimes spelled in its original Latin forms of Iudæa or Iudaea to distinguish it from the geographical region of Judea, incorporated the regions of Judea, Samaria and Idumea, and extended over parts of the former regions of the Hasmonean and Herodian kingdoms of Israel. It was named after Herod Archelaus's Tetrarchy of Judea, but the Roman province encompassed a much larger territory. The name "Judea" was derived from the Kingdom of Judah of the 6th century BCE. The province of Judea was the scene of unrest at its founding in 6 CE during the Census of Quirinius and several wars were fought in its history, known as the Jewish-Roman Wars. The Temple of Jerusalem was destroyed by the Romans in 70 CE as part of the Great Jewish Revolt, resulting in the institution of the Fiscus Judaicus, and after Bar Kokhba's revolt (132-135), the Roman Emperor Hadrian changed the name of the province to Syria Palaestina and Jerusalem to Aelia Capitolina , which certain scholars conclude was an attempt to remove the relationship of the Jewish people to the region.

Julia the Younger and Agrippina Senior. Augustus (Latin: Impertor Caesar Dv Flius Augustus ; 23 September 63 BC - 19 August 14 AD) was the founder of the Roman Empire and its first Emperor, ruling from 27 BC until his death in AD 14. He was born Gaius Octavius into an old and wealthy equestrian branch of the plebeian Octavii family. His maternal great-uncle Julius Caesar was assassinated in 44 BC, and Octavius was named in Caesar's will as his adopted son and heir, then known as Octavianus (Anglicized as Octavian). He, Mark Antony, and Marcus Lepidus formed the Second Triumvirate to defeat the assassins of Caesar.

Following their victory at Philippi, the Triumvirate divided the Roman Republic among themselves and ruled as military dictators. The Triumvirate was eventually torn apart under the competing ambitions of its members. Lepidus was driven into exile and stripped of his position, and Antony committed suicide following his defeat at the Battle of Actium by Octavian in 31 BC. After the demise of the Second Triumvirate, Augustus restored the outward façade of the free Republic, with governmental power vested in the Roman Senate, the executive magistrates, and the legislative assemblies. In reality, however, he retained his autocratic power over the Republic as a military dictator.

By law, Augustus held a collection of powers granted to him for life by the Senate, including supreme military command, and those of tribune and censor. It took several years for Augustus to develop the framework within which a formally republican state could be led under his sole rule.

He rejected monarchical titles, and instead called himself Princeps Civitatis ("First Citizen of the State"). The resulting constitutional framework became known as the Principate, the first phase of the Roman Empire. The reign of Augustus initiated an era of relative peace known as the Pax Romana (The Roman Peace). The Roman world was largely free from large-scale conflict for more than two centuries, despite continuous wars of imperial expansion on the Empire's frontiers and one year-long civil war over the imperial succession.

Augustus dramatically enlarged the Empire, annexing Egypt, Dalmatia, Pannonia, Noricum, and Raetia; expanding possessions in Africa; expanding into Germania; and completing the conquest of Hispania. Beyond the frontiers, he secured the Empire with a buffer region of client states and made peace with the Parthian Empire through diplomacy. He reformed the Roman system of taxation, developed networks of roads with an official courier system, established a standing army, established the Praetorian Guard, created official police and fire-fighting services for Rome, and rebuilt much of the city during his reign. Augustus died in AD 14 at the age of 75.

He may have died from natural causes, although there were unconfirmed rumors that his wife Livia poisoned him. He was succeeded as Emperor by his adopted son (also stepson and former son-in-law) Tiberius. World-renowned expert numismatist, enthusiast, author and dealer in authentic ancient Greek, ancient Roman, ancient Byzantine, world coins & more. Ilya Zlobin is an independent individual who has a passion for coin collecting, research and understanding the importance of the historical context and significance all coins and objects represent. Send me a message about this and I can update your invoice should you want this method.

How and where do I learn more about collecting ancient coins? Visit the Guide on How to Use My Store. For on an overview about using my store, with additional information and links to all other parts of my store which may include educational information on topics you are looking for. The item "COPONIUS Prefect of Roman JERUSALEM under Augustus 5AD BIBLICAL Coin NGC i70913" is in sale since Tuesday, July 17, 2018. This item is in the category "Coins & Paper Money\Coins\ Ancient\Greek (450 BC-100 AD)".