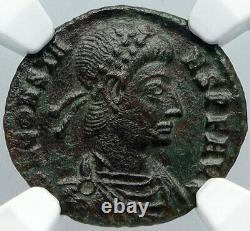 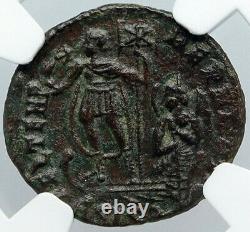 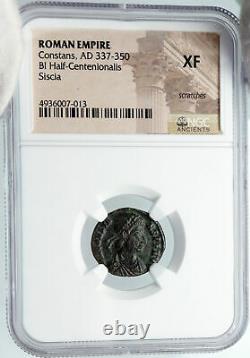 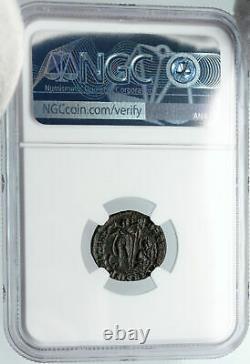 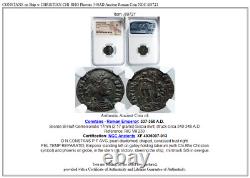 Reference: RIC VIII 230 Certification: NGC Ancients. XF 4936007-013 D N CONSTANS P F AVG, pearl-diademed, draped, cuirassed bust right. The labarum was a vexillum (military standard) that displayed the "Chi-Rho" symbol? A christogram formed from the first two Greek letters of the word "Christ" Greek:??? It was first used by the Roman emperor Constantine I. Since the vexillum consisted of a flag suspended from the crossbar of a cross, it was ideally suited to symbolize the crucifixion of Christ. Ancient sources draw an unambiguous distinction between the two terms "labarum" and "Chi-Rho", even though later usage sometimes regards the two as synonyms. The name labarum was applied both to the original standard used by Constantine the Great and to the many standards produced in imitation of it in the Late Antique world, and subsequently. The Chi Rho is one of the earliest forms of christogram, and is used by some Christians. It is formed by superimposing the first two (capital) letters chi and rho?? S = KR istos = Christ in such a way to produce the monogram. Although not technically a Christian cross, the Chi-Rho invokes the authority of Jesus, as well as symbolising his status as the Christ. The Chi-Rho symbol was also used by pagan Greek scribes to mark, in the margin, a particularly valuable or relevant passage; the combined letters Chi and Rho standing for chreston, meaning good. Some coins of Ptolemy III Euergetes r. 246-222 BC were marked with a Chi-Rho.

323 - 350 or Constans I was Roman Emperor from 337 to 350. He defeated his brother Constantine II in 340, but anger in the army over his personal life (homosexuality) and favouritism towards his barbarian bodyguards led the general Magnentius to rebel, resulting in the assassination of Constans in 350. Constans was the third and youngest son of Constantine the Great and Fausta, his father's second wife.

He was educated at the court of his father at Constantinople under the tutelage of the poet Aemilius Magnus Arborius. On 25 December 333, Constantine I elevated Constans to the rank of Caesar at Constantinople. Constans became engaged to Olympias, the daughter of the Praetorian Prefect Ablabius, but the marriage never came to pass. With Constantine's death in 337, Constans and his two brothers, Constantine II and Constantius II, divided the Roman world between themselves and disposed of virtually all relatives who could possibly have a claim to the throne. The army proclaimed them Augusti on September 9, 337. Almost immediately, Constans was required to deal with a Sarmatian invasion in late 337, over whom he won a resounding victory. Constans was initially under the guardianship of Constantine II. The original settlement assigned Constans the praetorian prefecturess of Italy and Africa. Constans was unhappy with this division, so the brothers met at Viminacium in 338 to revise the boundaries. Constans managed to extract the prefecture of Illyricum and the diocese of Thrace, provinces that were originally to be ruled by his cousin Dalmatius, as per Constantine I's proposed division after his death.

Constantine II soon complained that he had not received the amount of territory that was his due as the eldest son. Annoyed that Constans had received Thrace and Macedoniaa> after the death of Dalmatius, Constantine demanded that Constans hand over the African provinces, which he agreed to do in order to maintain a fragile peace. Soon, however, they began quarreling over which parts of the African provinces belonged to Carthage, and thus Constantine, and which belonged to Italy, and therefore Constans.

This led to growing tensions between the two brothers, which were only heightened by Constans finally coming of age and Constantine refusing to give up his guardianship. In 340 Constantine II invaded Italy. Constans, at that time in Dacia, detached and sent a select and disciplined body of his Illyrian troops, stating that he would follow them in person with the remainder of his forces.

Constantine was eventually trapped at Aquileia, where he died, leaving Constans to inherit all of his brother's former territories - Hispania, Britannia and Gaul. Constans began his reign in an energetic fashion. In 341-42, he led a successful campaign against the Franks, and in the early months of 343 he visited Britain. The source for this visit, Julius Firmicus Maternus, does not provide a reason, but the quick movement and the danger involved in crossing the channel in the dangerous winter months suggests it was in response to a military emergency, possibly to repel the Picts and Scots. Regarding religion, Constans was tolerant of Judaism and promulgated an edict banning pagan sacrifices in 341.

He suppressed Donatism in Africa and supported Nicene orthodoxy against Arianism, which was championed by his brother Constantius. Although Constans called the Council of Sardica in 343 to settle the conflict, it was a complete failure, and by 346 the two emperors were on the point of open warfare over the dispute. The conflict was only resolved by an interim agreement which allowed each emperor to support their preferred clergy within their own spheres of influence. The Roman historian Eutropius says Constans "indulged in great vices, " in reference to his homosexuality, and Aurelius Victor stated that Constans had a reputation for scandalous behaviour with handsome barbarian hostages. " Nevertheless, Constans did sponsor a decree alongside Constantius II that ruled that marriage based on "unnatural sex should be punished meticulously.

Boswell argues that the decree outlawed homosexual marriages only, rather than homosexual activity more generally. However, it was likely the case that Constans promulgated the legislation under pressure from the growing band of Christian leaders, and attempting to placate public outrage at his own perceived indecencies.

In the final years of his reign, Constans developed a reputation for cruelty and misrule. Dominated by favourites and openly preferring his select bodyguard, he lost the support of the legions.

In 350, the general Magnentius declared himself emperor at Augustodunum with the support of the troops on the Rhine frontier and, later, the western provinces of the Empire. Constans was enjoying himself nearby when he was notified of the elevation of Magnentius. Lacking any support beyond his immediate household, he was forced to flee for his life. As he was trying to reach Hispania, supporters of Magnentius cornered him in a fortification in Helena (now Elne) in the eastern Pyrenees of southwestern Gaul, where he was killed after seeking sanctuary in a temple.

An alleged prophecy at his birth had said Constans would die in the arms of his grandmother. His place of death happens to have been named after Helena, mother of Constantine a and his own grandmother, thus realizing the prophecy.

What is a certificate of authenticity and what guarantees do you give that the item is authentic? You will be very happy with what you get with the COA; a professional presentation of the coin, with all of the relevant information and a picture of the coin you saw in the listing. Additionally, the coin is inside it's own protective coin flip (holder), with a 2x2 inch description of the coin matching the individual number on the COA. Whether your goal is to collect or give the item as a gift, coins presented like this could be more prized and valued higher than items that were not given such care and attention to. When should I leave feedback? Please don't leave any negative feedbacks, as it happens sometimes that people rush to leave feedback before letting sufficient time for their order to arrive. The matter of fact is that any issues can be resolved, as reputation is most important to me.

Visit the Guide on How to Use My Store. For on an overview about using my store, with additional information and links to all other parts of my store which may include educational information on topics you are looking for. This item is in the category "Coins & Paper Money\Coins: Ancient\Roman: Imperial (27 BC-476 AD)".