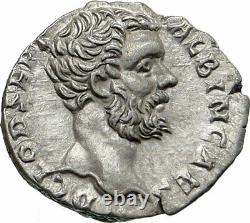 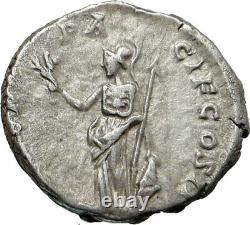 Reference: RIC 7, C 48 D CLOD SEPT ALBIN CAES, Bare head right. MINER PACIF COS II, Minerva standing left, holding branch and spear with shield. Minerva (Etruscan : Menrfa, or Menrva) was the Roman goddess whom Hellenizing Romans from the second century BC onwards equated with the Greek goddess Athena. She was the virgin goddess of poetry, medicine, wisdom, commerce, weaving, crafts, magic, and the inventor of music. She is often depicted with an owl, her sacred creature and is, through this connection, a symbol of wisdom.

This article focuses on Minerva in ancient Rome and in cultic practice. For information on Latin literary mythological accounts of Minerva, which were heavily influenced by Greek mythology, see Pallas Athena, where she is one of three virgin goddesses along with Artemis and Hestia, known by the Romans as Diana and Vesta. The name "Minerva" is imported from the Etruscans who called her Menrva. Extrapolating from her Roman nature, it is assumed that in Etruscan mythology, Minerva was the goddess of wisdom, war, art, schools and commerce.

She was the Etruscan counterpart to Greek Athena. Like Athena, Minerva was born from the head of her father, Jupiter (Greek Zeus).

By a process of folk etymology, the Romans could have confused the phones of her foreign name with those of the root men- in Latin words such as mens meaning "mind", perhaps because one of her aspects as goddess pertained to the intellectual. The word mens has the Proto-Indo-European mn- stem, linked with memory as in Greek Mnemosyne µ?? Menrva was part of a holy triad with Tinia and Uni, equivalent to the Roman Capitoline Triad of Jupiter-Juno-Minerva. Minerva was the daughter of Jupiter. As Minerva Medica, she was the goddess of medicine and doctors.

As Minerva Achaea, she was worshipped at Luceria in Apulia where votive gifts and arms said to be those of Diomedes were preserved in her temple. In Fasti III, Ovid called her the goddess of a thousand works. Minerva was worshipped throughout Italy, though only in Rome did she take on the warlike character shared by Athena.

Her worship was also taken out to the empire - in Britain, for example, she was conflated with the local wisdom goddess Sulis. The Romans celebrated her festival from March 19 to March 23 during the day which is called, in the neuter plural, Quinquatria, the fifth after the Ides of March, the nineteenth, an artisans' holiday. A lesser version, the Minusculae Quinquatria, was held on the Ides of June, June 13, by the flute-players, who were particularly useful to religion. In 207 BC, a guild of poets and actors was formed to meet and make votive offerings at the temple of Minerva on the Aventine hill. Among others, its members included Livius Andronicus.

The Aventine sanctuary of Minerva continued to be an important center of the arts for much of the middle Roman Republic. Minerva was worshipped on the Capitoline Hill as one of the Capitoline Triad along with Jupiter and Juno, at the Temple of Minerva Medica, and at the "Delubrum Minervae" a temple founded around 50 BC by Pompey on the site now occupied by the church of Santa Maria sopra Minerva facing the present-day Piazza della Minerva.

Clodius Albinus Latin: Decimus Clodius Septimius Albinus Augustus ; ca. 150 - 19 February 197 was a Roman usurper who was proclaimed emperor by the legions in Britain and Hispania (the Iberian Peninsula, comprising modern Spain and Portugal) after the murder of Pertinax in 193 (known as "Year of the Five Emperors"), and who proclaimed himself emperor again in 196, before his final defeat the following year. Albinus was born in Hadrumetum, Africa Province (Sousse, Tunisia) to an aristocratic Roman family of Ceionia (gens) origin. His father, Ceionius, said his son received the name of Albinus because of the extraordinary whiteness of his complexion.

Showing a disposition for military life, he entered the army when very young and served with distinction, especially in 175 during the rebellion of Avidius Cassius against Emperor Marcus Aurelius. His merit was acknowledged by the Emperor in two letters in which he calls Albinus an African, who resembled his countrymen but little, and who was praiseworthy for his military experience and the gravity of his character. The Emperor likewise declared that without Albinus the legions (in Bithynia) would have gone over to Avidius Cassius, and that he intended to have him chosen consul. The Emperor Commodus gave Albinus a command in Gallia Belgica and afterwards in Britain. A false rumor having been spread that Commodus had died, Albinus denounced the man before his soldiers in Britain, calling Commodus a tyrant, and maintaining that it would be useful to the Roman Empire to restore to the senate its ancient dignity and power.

The Senate was very pleased with these sentiments, but not so the Emperor, who sent Junius Severus to relieve Albinus of his command. Despite this, Albinus kept his command until after the murders of Commodus and his successor Pertinax in 193. Immediately afterwards, Pescennius Niger was proclaimed Emperor by the legions in Syria; Septimius Severus by the troops in Illyricum and Pannonia; and Albinus by the armies in Britain and Gaul. In the civil war that followed, Albinus was initially allied with Septimius Severus, who had captured Rome.

Albinus added the name Septimius to his own, and accepted the title of Caesar from him; the two shared a consulship in 194. Albinus remained effective ruler of much of the western part of the Empire, with support from three British legions and one Spanish.

When Didius Julianus was put to death by order of the Senate, who dreaded the power of Septimius Severus, the latter turned his arms against Pescennius Niger. After the defeat and death of Niger in 194, and the complete discomfiture of his adherents, especially after the fall of Byzantium in 196, Severus resolved to make himself the absolute master of the Roman Empire. Albinus, seeing the danger of his position, prepared for resistance. He narrowly escaped being assassinated by a messenger of Severus, after which he put himself at the head of his army, which is said to have consisted of 150,000 men. In autumn 196, Albinus proclaimed himself Emperor (Imperator Caesar Decimus Clodius Septimius Albinus Augustus) and crossed from Britain to Gaul, bringing a large part of the British garrison with him.

He defeated Severus' legate Virius Lupus, and was able to lay claim to the military resources of Gaul, but although he made Lugdunum the headquarters of his forces, he was unable to win the allegiance of the Rhine legions. On 19 February 197 Albinus met Severus' army at the Battle of Lugdunum. After a hard-fought battle, with 150,000 troops on each side according to Dio Cassius, Albinus was defeated and killed himself, or was captured and executed on the orders of Severus. Severus had his naked body laid out on the ground before him, so that he could ride his horse over it, in a final act of humiliation.

If Albinus' wife and sons were initially pardoned by Severus, he appeared to change his mind almost immediately afterwards, for as the dead Albinus was beheaded, so were they. Albinus' headless body was thrown into the Rhône, together with the corpses of his murdered family. Severus sent his head to Rome as a warning to his supporters; with it he sent an insolent letter, in which he mocked the senate for their loyalty to Albinus. The town of Lugdunum was plundered, and the adherents of Albinus were cruelly persecuted by Severus.

Albinus was a severe and often cruel commander, and he has been called the Catiline of his time. He had one son, or perhaps two, who were executed with their mother by order of Severus. It is said that he wrote a treatise on agriculture and a collection of Milesian tales. World-renowned expert numismatist, enthusiast, author and dealer in authentic ancient Greek, ancient Roman, ancient Byzantine, world coins & more. Ilya Zlobin is an independent individual who has a passion for coin collecting, research and understanding the importance of the historical context and significance all coins and objects represent. Send me a message about this and I can update your invoice should you want this method.