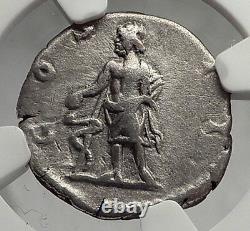 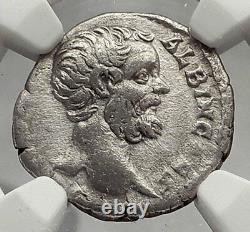 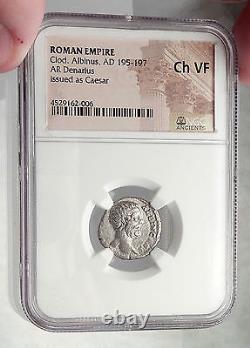 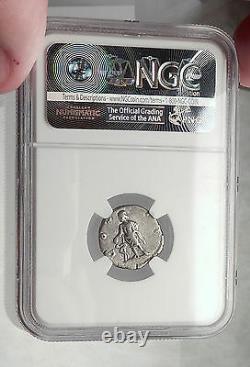 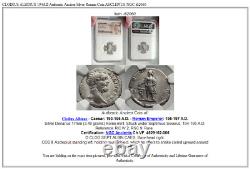 Reference: RIC IV 2; RSC 9. Ch VF 4529162-006 D CLOD SEPT ALBIN CAES, Bare head right. COS II, Asclepius standing left, holding round object, which he offers to snake coiled upward around rod to left. Asclepius is the god of medicine and healing in ancient Greek religion. Asclepius represents the healing aspect of the medical arts; his daughters are Hygieia ("Health"), Iaso ("Medicine"), Aceso ("Healing"), and Panacea ("Universal Remedy"). The rod of Asclepius, a snake-entwined staff, remains a symbol of medicine today, although sometimes the caduceus, or staff with two snakes, is mistakenly used instead. He was associated with the Roman/Etruscan god Vediovis.

He was one of Apollo's servants. The rod of Asclepius, also known as the asklepian, is an ancient symbol associated with astrology, the Greek god Asclepius and with medicine and healing.

It consists of a serpent entwined around a staff. The name of the symbol derives from its early and widespread association with Asclepius, the son of Apollo, who was a practitioner of medicine in ancient Greek mythology. His attributes, the snake and the staff, sometimes depicted separately in antiquity, are combined in this symbol. The Rod of Asclepius also represents the constellation Ophiuchus (or Ophiuchus Serpentarius), the thirteenth sign of the sidereal zodiac.

Hippocrates himself was a worshipper of Asclepius. Clodius Albinus Latin: Decimus Clodius Septimius Albinus Augustus ; ca. 150 - 19 February 197 was a Roman usurper who was proclaimed emperor by the legions in Britain and Hispania (the Iberian Peninsula, comprising modern Spain and Portugal) after the murder of Pertinax in 193 (known as "Year of the Five Emperors"), and who proclaimed himself emperor again in 196, before his final defeat the following year.

Albinus was born in Hadrumetum, Africa Province (Sousse, Tunisia) to an aristocratic Roman family of Ceionia (gens) origin. His father, Ceionius, said his son received the name of Albinus because of the extraordinary whiteness of his complexion. Showing a disposition for military life, he entered the army when very young and served with distinction, especially in 175 during the rebellion of Avidius Cassius against Emperor Marcus Aurelius. His merit was acknowledged by the Emperor in two letters in which he calls Albinus an African, who resembled his countrymen but little, and who was praiseworthy for his military experience and the gravity of his character.

The Emperor likewise declared that without Albinus the legions (in Bithynia) would have gone over to Avidius Cassius, and that he intended to have him chosen consul. The Emperor Commodus gave Albinus a command in Gallia Belgica and afterwards in Britain.

A false rumor having been spread that Commodus had died, Albinus denounced the man before his soldiers in Britain, calling Commodus a tyrant, and maintaining that it would be useful to the Roman Empire to restore to the senate its ancient dignity and power. The Senate was very pleased with these sentiments, but not so the Emperor, who sent Junius Severus to relieve Albinus of his command. Despite this, Albinus kept his command until after the murders of Commodus and his successor Pertinax in 193. Immediately afterwards, Pescennius Niger was proclaimed Emperor by the legions in Syria; Septimius Severus by the troops in Illyricum and Pannonia; and Albinus by the armies in Britain and Gaul. In the civil war that followed, Albinus was initially allied with Septimius Severus, who had captured Rome. Albinus added the name Septimius to his own, and accepted the title of Caesar from him; the two shared a consulship in 194. Albinus remained effective ruler of much of the western part of the Empire, with support from three British legions and one Spanish.

When Didius Julianus was put to death by order of the Senate, who dreaded the power of Septimius Severus, the latter turned his arms against Pescennius Niger. After the defeat and death of Niger in 194, and the complete discomfiture of his adherents, especially after the fall of Byzantium in 196, Severus resolved to make himself the absolute master of the Roman Empire.

Albinus, seeing the danger of his position, prepared for resistance. He narrowly escaped being assassinated by a messenger of Severus, after which he put himself at the head of his army, which is said to have consisted of 150,000 men. In autumn 196, Albinus proclaimed himself Emperor (Imperator Caesar Decimus Clodius Septimius Albinus Augustus) and crossed from Britain to Gaul, bringing a large part of the British garrison with him. He defeated Severus' legate Virius Lupus, and was able to lay claim to the military resources of Gaul, but although he made Lugdunum the headquarters of his forces, he was unable to win the allegiance of the Rhine legions. On 19 February 197 Albinus met Severus' army at the Battle of Lugdunum.

After a hard-fought battle, with 150,000 troops on each side according to Dio Cassius, Albinus was defeated and killed himself, or was captured and executed on the orders of Severus. Severus had his naked body laid out on the ground before him, so that he could ride his horse over it, in a final act of humiliation.

If Albinus' wife and sons were initially pardoned by Severus, he appeared to change his mind almost immediately afterwards, for as the dead Albinus was beheaded, so were they. Albinus' headless body was thrown into the Rhône, together with the corpses of his murdered family.

Severus sent his head to Rome as a warning to his supporters; with it he sent an insolent letter, in which he mocked the senate for their loyalty to Albinus. The town of Lugdunum was plundered, and the adherents of Albinus were cruelly persecuted by Severus.

Albinus was a severe and often cruel commander, and he has been called the Catiline of his time. He had one son, or perhaps two, who were executed with their mother by order of Severus. It is said that he wrote a treatise on agriculture and a collection of Milesian tales. World-renowned expert numismatist, enthusiast, author and dealer in authentic ancient Greek, ancient Roman, ancient Byzantine, world coins & more. Ilya Zlobin is an independent individual who has a passion for coin collecting, research and understanding the importance of the historical context and significance all coins and objects represent.