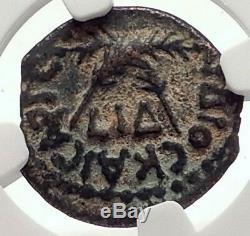 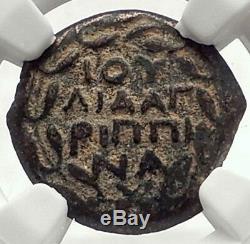 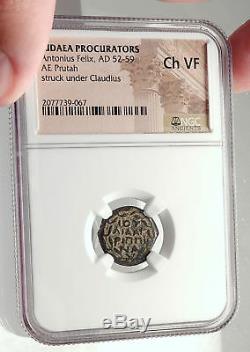 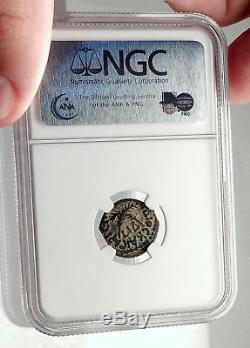 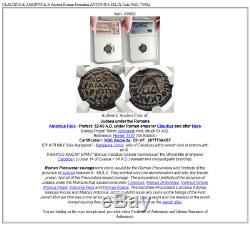 ; LI year 14 of Caesar = 54 A. Beneath two crossed palm branches. Roman Procurator coinage were coins issued by the Roman Procurators and Prefects of the province of Judaea. Between 6 - 66 A. They minted only one denomination and size, the bronze prutah.

The Roman province of Judea (Hebrew: , Standard Yehuda Tiberian Yehûh ; Arabic: ; Greek: Ioudaia ; Latin: Idaea), sometimes spelled in its original Latin forms of Iudæa or Iudaea to distinguish it from the geographical region of Judea, incorporated the regions of Judea, Samaria and Idumea, and extended over parts of the former regions of the Hasmonean and Herodian kingdoms of Israel. It was named after Herod Archelaus's Tetrarchy of Judea, but the Roman province encompassed a much larger territory.

The name "Judea" was derived from the Kingdom of Judah of the 6th century BCE. The province of Judea was the scene of unrest at its founding in 6 CE during the Census of Quirinius and several wars were fought in its history, known as the Jewish-Roman Wars. The Temple of Jerusalem was destroyed by the Romans in 70 CE as part of the Great Jewish Revolt, resulting in the institution of the Fiscus Judaicus, and after Bar Kokhba's revolt (132-135), the Roman Emperor Hadrian changed the name of the province to Syria Palaestina and Jerusalem to Aelia Capitolina , which certain scholars conclude was an attempt to remove the relationship of the Jewish people to the region. Marcus Antonius Felix Felix , in Greek: , born between 5/10-? Was the Roman procurator of Iudaea Province 52-58, in succession to Ventidius Cumanus. Felix was the younger brother of the Greek freedman Marcus Antonius Pallas. Pallas served as a secretary of the treasury during the reign of the Emperor Claudius. Felix was a Greek freedman either of Claudius, according to which theory Josephus Antiq. 7 calls him Claudius Felix , or for Claudius's mother Antonia Minor, a daughter of Triumvir Mark Antony to Octavia Minor and niece of Emperor Augustus. According to Tacitus, Pallas and Felix descended from the Greek Kings of Arcadia. Felix became the procurator by the petition of his brother.

Felix's cruelty and licentiousness, coupled with his accessibility to bribes (see Book of Acts 24:26), led to a great increase of crime in Judaea. The period of his rule was marked by internal feuds and disturbances, which he put down with severity. After Paul the Apostle was arrested in Jerusalem and rescued from a plot against his life, the local Roman chiliarch Claudius Lysias transferred him to Caesarea, where he stood trial before Felix. On at least one further occasion Felix and his wife Drusilla heard Paul discourse, and later on frequently sent for Paul and talked with him (Acts 24:24-26).

When Felix was succeeded as procurator, having already detained Paul for two years, he left him imprisoned as a favor to the Jews (Acts 24:27). On returning to Rome, Felix was accused of using a dispute between the Jews and Syrians of Caesarea as a pretext to slay and plunder the inhabitants, but through the intercession of his brother, the freedman Pallas, who had great influence with the Emperor Nero, he escaped unpunished. Porcius Festus succeeded him as procurator of Judea. His first wife was Drusilla of Mauretania the Elder, daughter of Cleopatra Selene II and Juba II of Numidia, and sister to Ptolemy of Mauretania. Drusilla of Mauretania the Elder is often confused with her niece, Drusilla of Mauretania the Younger, daughter of her brother Ptolemy of Mauretania and Julia Urania. Felix' second wife was Drusilla of Judea, daughter of Herod Agrippa I and Cypros. Drusilla of Judea divorced Gaius Julius Azizus, King of Emesa to marry him. Felix and the Judean Drusilla, had a son, Marcus Antonius Agrippa, who died along with this Drusilla and many of the inhabitants of Pompeii and Herculaneum in the eruption of Mount Vesuvius on 24 August 79, and a daughter, Antonia Clementiana. The Judean Drusilla was one of only two major figures reported as dying in the eruption of Mount Vesuvius, the other being Pliny the Elder. Antonia Agrippina may have been a daughter from their son's marriage (this name was graffiti in a Royal Tomb in Egypt). Clementiana became a grandmother to a Lucius Anneius Domitius Proculus. Two possible descendants from this marriage are Marcus Antonius Fronto Salvianus (a quaestor) and his son Marcus Antonius Felix Magnus, a high priest in 225. After the eruption, Felix married for a third time, but little is known about his third wife. Julia Agrippina , most commonly referred to as Agrippina Minor or Agrippina the Younger , and after 50 known as Julia Augusta Agrippina (Minor Latin for the'younger' , 7 November 15 or 6 November 16 - 19/23 March 59) was a Roman Empress and one of the more prominent women in the Julio-Claudian dynasty. She was a great-granddaughter of the Emperor Augustus, great-niece and adoptive granddaughter of the Emperor Tiberius, sister of the Emperor Caligula, niece and fourth wife of the Emperor Claudius, and mother of the Emperor Nero. Agrippina the Younger has been described by both the ancient and modern sources as'ruthless, ambitious, violent and domineering'.

She was a beautiful and reputable woman and according to Pliny the Elder, she had a double canine in her upper right jaw, a sign of good fortune. Many ancient historians accuse Agrippina of poisoning Emperor Claudius, though accounts vary. Tiberius Claudius Caesar Augustus Germanicus (1 August 10 BC - 13 October AD 54) (Tiberius Claudius Drusus from birth to AD 4, then Tiberius Claudius Nero Germanicus from then until his accession) was the fourth Roman Emperor, a member of the Julio-Claudian dynasty, ruling from 24 January AD 41 to his death in AD 54.

Born in Lugdunum in Gaul (modern-day Lyon, France), to Drusus and Antonia Minor, he was the first Roman Emperor to be born outside Italia. He was reportedly afflicted with some type of disability, and his family had virtually excluded him from public office until his consulship with his nephew Caligula in AD 37. This infirmity may have saved him from the fate of many other Roman nobles during the purges of Tiberius' and Caligula's reigns; potential enemies did not see him as a serious threat to them.

His very survival led to his being declared emperor (reportedly because the Praetorian Guard insisted) after Caligula's assassination, at which point he was the last adult male of his family. Despite his lack of political experience, Claudius proved to be an able administrator and a great builder of public works. His reign saw an expansion of the empire, including the conquest of Britain. He took a personal interest in the law, presided at public trials, and issued up to 20 edicts a day; however, he was seen as vulnerable throughout his rule, particularly by the nobility. Claudius was constantly forced to shore up his position.

This resulted in the deaths of many senators. Claudius also suffered setbacks in his personal life, one of which may have led to his murder. These events damaged his reputation among the ancient writers, though more recent historians have revised this opinion. World-renowned expert numismatist, enthusiast, author and dealer in authentic ancient Greek, ancient Roman, ancient Byzantine, world coins & more.

The item "CLAUDIUS & AGRIPPINA Jr Ancient Roman Jerusalem ANTONIUS FELIX Coin NGC i70982" is in sale since Tuesday, July 17, 2018. This item is in the category "Coins & Paper Money\Coins\ Ancient\Greek (450 BC-100 AD)". The seller is "highrating_lowprice" and is located in Rego Park, New York. This item can be shipped worldwide.