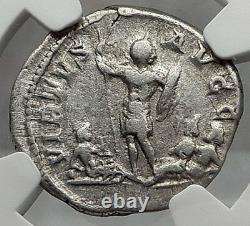 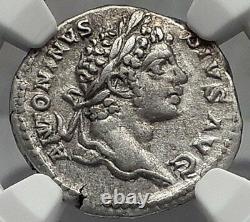 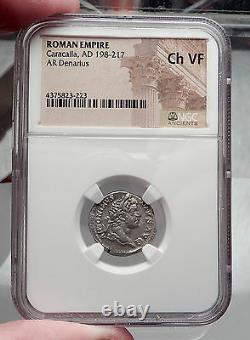 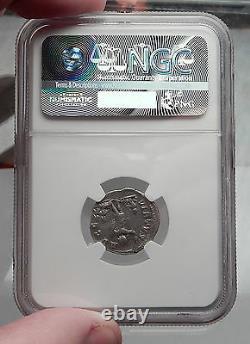 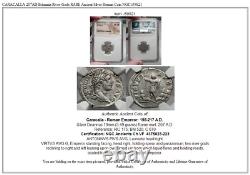 Silver Deanrius 19mm (3.49 grams) Rome mint: 207 A. Reference: RIC 175; BM 520; C 670 Certification: NGC Ancients Ch VF 4375823-223 ANTONINVS PIVS AVG, Laureate head right. VIRTVS AVG G, Emperor standing facing, head right, holding spear and parazonium; two river gods reclining to right and left leaning upon overturned urn from which liquid flows and holding reeds, seated female (Britannia) at feet of emperor. Septimius Severus and Geta 211 A. Marcus Aurelius Severus Antoninus Augustus. Caracalla is remembered as one of the most notorious and unpleasant of emperors because of the massacres and persecutions he authorized and instigated throughout the Empire. He is also one of the emperors who commissioned a large public bath-house (thermae) in Rome. The remains of the Baths of Caracalla are still one of the major tourist attractions of the Italian capital. Caracalla, of mixed Punic, Roman and Syrian descent, was born Lucius Septimius Bassianus in Lugdunum, Gaul (now Lyon, France), the son of the later Emperor Septimius Severus and Julia Domna. At the age of seven, his name was changed to Marcus Aurelius Septimius Bassianus Antoninus to create a connection to the family of the philosopher emperor Marcus Aurelius. He was later given the Caracalla nickname , which referred to the Gallic hooded tunic he habitually wore and which he made fashionable. His father died in 211 at Eboracum (now York) while on campaign in northern Britain. Caracalla was present and was then proclaimed emperor by the troops along with his brother Publius Septimius Antoninus Geta. Caracalla suspended the campaign in Caledonia and soon ended all military activity, as both brothers wanted to be sole ruler thus making relations between them increasingly hostile. When they tried to rule the Empire jointly they actually considered dividing it in halves, but were persuaded not to do so by their mother.

Then in December 211 at a reconciliation meeting arranged by their mother Julia, Caracalla had Geta assassinated by members of the Praetorian Guard loyal to himself, Geta dying in his mother's arms. Caracalla then persecuted and executed most of Geta's supporters and ordered a damnatio memoriae pronounced by the Senate against his brother's memory. Geta's image was simply removed from all coinage, paintings and statues, leaving a blank space next to Caracalla's. Among those executed were his former cousin-wife Fulvia Plautilla, his unnamed daughter with Plautilla along with her brother and other members of the family of his former father-in-law Gaius Fulvius Plautianus.

Plautianus had already been executed for alleged treachery against emperor Severus in 205. In 213, Caracalla went north to the German frontier to deal with the Alamanni tribesmen who were raiding in the Agri Decumates.

The Romans did defeat the Alamanni in battle near the river Main, but failed to win a decisive victory over them. He also acquired the surname Alemannicus at this time. The following year the tyrant traveled to the East, to Syria and Egypt never to return to Rome. Gibbon in his work describes Caracalla as "the common enemy of mankind". He left the capital in 213, about a year after the murder of Geta, and spent the rest of his reign in the provinces, particularly those of the East. He kept the Senate and other wealthy families in check by forcing them to construct, at their own expense, palaces, theaters, and places of entertainment throughout the periphery. When the inhabitants of Alexandria heard Caracalla's claims that he had killed Geta in self-defense, they produced a satire mocking this as well as Caracalla's other pretensions. In 215, Caracalla savagely responded to this insult by slaughtering the deputation of leading citizens who had unsuspectingly assembled before the city to greet his arrival, and then unleashed his troops for several days of looting and plunder in Alexandria. According to historian Cassius Dio, over 20,000 people were killed.

During his reign as emperor, Caracalla raised the annual pay of an average legionary to 675 denarii and lavished many benefits on the army which he both feared and admired, as instructed by his father Septimius Severus who had told him on his deathbed to always mind the soldiers and ignore everyone else. Caracalla did manage to win the trust of the military with generous pay rises and popular gestures, like marching on foot among the ordinary soldiers, eating the same food, and even grinding his own flour with them. With the soldiers, "He forgot even the proper dignity of his rank, encouraging their insolent familiarity, " according to Gibbon. The vigour of the army, instead of being confirmed by the severe discipline of the camps, melted away in the luxury of the cities. Seeking to secure his own legacy, Caracalla also commissioned one of Rome's last major architectural achievements, the Baths of Caracalla, the 2nd largest public baths ever built in ancient Rome.

The main room of the baths was larger than St. Peter's Basilica, and could easily accommodate over 2,000 Roman citizens at one time. The bath house opened in 216, complete with libraries, private rooms and outdoor tracks.

Internally it was lavishly decorated with gold-trimmed marble floors, columns, mosaics and colossal statuary. The Constitutio Antoniniana (Latin: "Constitution [or Edict] of Antoninus") (also called Edict of Caracalla) was an edict issued in 212 by Caracalla which declared that all free men in the Roman Empire were to be given full Roman citizenship and all free women in the Empire were given the same rights as Roman women. Before 212, for the most part only inhabitants of Italia held full Roman citizenship.

Colonies of Romans established in other provinces, Romans (or their descendants) living in provinces, the inhabitants of various cities throughout the Empire, and small numbers of local nobles (such as kings of client countries) held full citizenship also. Provincials, on the other hand, were usually non-citizens, although many held the Latin Right. The effect of this was to remove the distinction that citizenship had held since the foundation of Rome and as such the act had a profound effect upon the fabric of Roman society.

According to the historian Herodian, in 216, Caracalla tricked the Parthians into believing that he accepted a marriage and peace proposal, but then had the bride and guests slaughtered after the wedding celebrations. The thereafter ongoing conflict and skirmishes became known as the Parthian war of Caracalla. The Roman Empire during the reign of Caracalla. While travelling from Edessa to continue the war with Parthia, he was assassinated while urinating at a roadside near Carrhae on 8 April 217 (4 days after his 29th birthday), by Julius Martialis, an officer of his personal bodyguard. Herodian says that Martialis' brother had been executed a few days earlier by Caracalla on an unproven charge; Cassius Dio, on the other hand, says that Martialis was resentful at not being promoted to the rank of centurion.

The escort of the emperor gave him privacy to relieve himself, and Martialis then ran forward and killed Caracalla with a single sword stroke. While attempting to flee, the bold assassin was then quickly dispatched by a Scythian archer of the Imperial Guard.

Caracalla was succeeded by his Praetorian Guard Prefect, Macrinus, who (according to Herodian) was most probably responsible for having the emperor assassinated. According to Aurelius Victor in his Epitome de Caesaribus, the agnomen "Caracalla" refers to a Gallic cloak that Caracalla adopted as a personal fashion, which spread to his army and his court. Cassius Dio and the Historia Augusta agree that his nickname was derived from his cloak, but do not mention its country of origin.

Geoffrey of Monmouth's legendary History of the Kings of Britain makes Caracalla a king of Britain, referring to him by his actual name "Bassianus", rather than the nickname Caracalla. In the story, after Severus's death the Romans wanted to make Geta king of Britain, but the Britons preferred Bassianus because he had a British mother. The two brothers fought a battle in which Geta was killed and Bassianus succeeded to the throne. He ruled until he was betrayed by his Pictish allies and overthrown by Carausius, who, according to Geoffrey, was a Briton, rather than the historically much later Menapian Gaul that he actually was. Ilya Zlobin, world-renowned expert numismatist, enthusiast, author and dealer in authentic ancient Greek, ancient Roman, ancient Byzantine, world coins & more. Ilya Zlobin is an independent individual who has a passion for coin collecting, research and understanding the importance of the historical context and significance all coins and objects represent. Send me a message about this and I can update your invoice should you want this method. Getting your order to you, quickly and securely is a top priority and is taken seriously here. Great care is taken in packaging and mailing every item securely and quickly. What is a certificate of authenticity and what guarantees do you give that the item is authentic? You will be very happy with what you get with the COA; a professional presentation of the coin, with all of the relevant information and a picture of the coin you saw in the listing. Additionally, the coin is inside it's own protective coin flip (holder), with a 2x2 inch description of the coin matching the individual number on the COA. Whether your goal is to collect or give the item as a gift, coins presented like this could be more prized and valued higher than items that were not given such care and attention to. Is there a number I can call you with questions about my order?