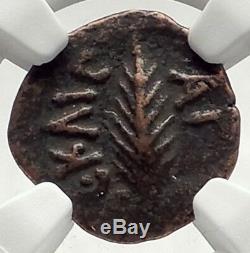 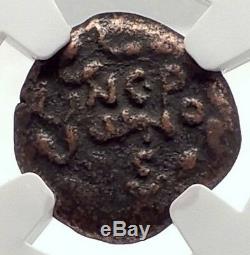 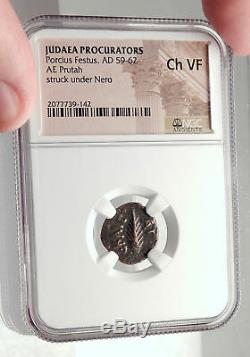 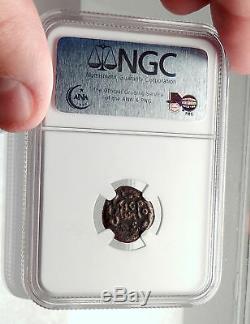 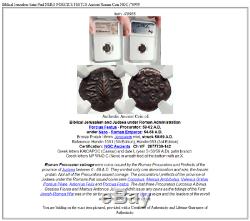 Reference: Hendin 1351 (5th Edition); Hendin 653 (3rd Edition) Certification: NGC Ancients. Ch VF 2077739-142 Greek letters KAICAPOC (Caesar) and date L year 5=58/59 A. Greek letters NP WNO C (Nero) in wreath tied at the bottom with an X. Roman Procurator coinage were coins issued by the Roman Procurators and Prefects of the province of Judaea. Between 6 - 66 A. They minted only one denomination and size, the bronze prutah. Not all of the Procurators issued coinage.

The procurators / prefects of the province of Judaea under the Romans that issued coins were Coponius. The last three Procurators Lucceius Albinus, Gessius Florus and Marcus Antonius Julianus didn't issue any coins as the tidings of the First Jewish-Roman War.

Was in the air brewing during emperor Nero's. Reign and the leaders of the revolt started issuing their own coins. Porcius Festus was procurator of Judea from about AD 58 to 62, succeeding Antonius Felix.

His exact time in office is not known. He inherited all of the problems of his predecessor in regard to the Roman practice of creating civic privileges for Jews.

Only one other issue bedeviled his administration, the controversy between Agrippa II and the priests in Jerusalem regarding the wall erected at the temple to break the view of the new wing of Agrippa's palace. During his administration, Jewish hostility to Rome was greatly inflamed by the civic privileges issue. Feelings were aroused which played an important part in the closely following Jewish War of AD 66. In the New Testament, the Apostle Paul had his final hearing before Festus. In Acts 25:12, Festus sought to induce Paul to go to Jerusalem for trial; Paul appealed to the Emperor.

The appeal resulted in Paul being deported to Rome in the autumn of AD 58. Prutah (Hebrew:) is a word borrowed from the Mishnah and the Talmud, in which it means "a coin of smaller value".

The word was probably derived originally from an Aramaic word with the same meaning. The prutah was an ancient copper Jewish coin with low value. A loaf of bread in ancient times was worth about 10 prutot (plural of prutah).

One prutah was also worth two lepta (singular lepton), which was the smallest denomination minted by the Hasmonean and Herodian Dynasty kings. Prutot were also minted by the Roman Procurators of the Province of Judea, and later were minted by the Jews during the First Jewish Revolt (sometimes called'Masada coins').

The Roman province of Judea (Hebrew: , Standard Yehuda Tiberian Yehûh ; Arabic: ; Greek: Ioudaia ; Latin: Idaea), sometimes spelled in its original Latin forms of Iudæa or Iudaea to distinguish it from the geographical region of Judea, incorporated the regions of Judea, Samaria and Idumea, and extended over parts of the former regions of the Hasmonean and Herodian kingdoms of Israel. It was named after Herod Archelaus's Tetrarchy of Judea, but the Roman province encompassed a much larger territory. The name "Judea" was derived from the Kingdom of Judah of the 6th century BCE. The province of Judea was the scene of unrest at its founding in 6 CE during the Census of Quirinius and several wars were fought in its history, known as the Jewish-Roman Wars.

The Temple of Jerusalem was destroyed by the Romans in 70 CE as part of the Great Jewish Revolt, resulting in the institution of the Fiscus Judaicus, and after Bar Kokhba's revolt (132-135), the Roman Emperor Hadrian changed the name of the province to Syria Palaestina and Jerusalem to Aelia Capitolina , which certain scholars conclude was an attempt to remove the relationship of the Jewish people to the region. Nero (Latin: Nero Claudius Caesar Augustus Germanicus ;15 December 37 - 9 June 68) was Roman Emperor from 54 to 68, and the last in the Julio-Claudian dynasty.

Nero was adopted by his great uncle Claudius to become his heir and successor, and succeeded to the throne in 54 following Claudius' death. During his reign, Nero focused much of his attention on diplomacy, trade, and enhancing the cultural life of the Empire.

He ordered theaters built and promoted athletic games. During his reign, the redoubtable general Corbulo conducted a successful war and negotiated peace with the Parthian Empire. His general Suetonius Paulinus crushed a revolt in Britain. Nero annexed the Bosporan Kingdom to the Empire and began the First Roman-Jewish War.

In 64, most of Rome was destroyed in the Great Fire of Rome, which many Romans believed Nero himself had started in order to clear land for his planned palatial complex, the Domus Aurea. In 68, the rebellion of Vindex in Gaul and later the acclamation of Galba in Hispania drove Nero from the throne. Facing assassination, he committed suicide on 9 June 68 (the first Roman emperor to do so) His death ended the Julio-Claudian Dynasty, sparking a brief period of civil wars known as the Year of the Four Emperors.

Nero's rule is often associated with tyranny and extravagance. He is known for many executions, including that of his mother, and the probable murder by poison of his stepbrother Britannicus. He is infamously known as the Emperor who "fiddled while Rome burned" and as an early persecutor of Christians. He was known for having captured Christians to burn them in his garden at night for a source of light.

Some sources, though, including some mentioned above, portray him as an emperor who was popular with the common Roman people, especially in the East. Some modern historians question the reliability of ancient sources when reporting on Nero's tyrannical acts.

How and where do I learn more about collecting ancient coins? Visit the "Guide on How to Use My Store". For on an overview about using my store, with additional information and links to all other parts of my store which may include educational information on topics you are looking for. The item "Biblical Jerusalem Saint Paul NERO PORCIUS FESTUS Ancient Roman Coin NGC i70955" is in sale since Tuesday, July 17, 2018.