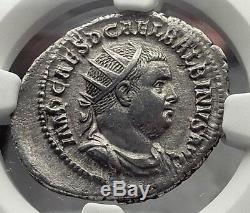 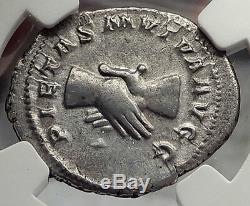 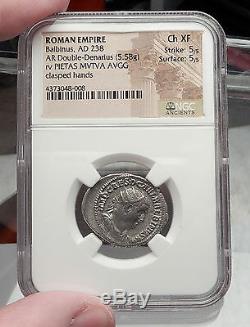 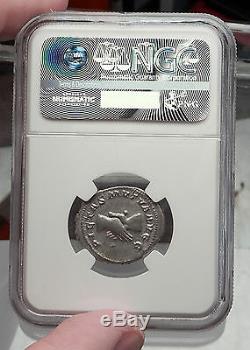 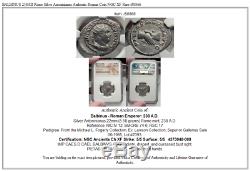 Not much is known about Balbinus before his elevation to emperor. It has been conjectured that he descended from Publius Coelius Balbinus Vibullius Pius, the consul ordinarius of 136 or 137, and wife Aquilia.

If this were true, he was also related to the family of Q. Pompeius Falco , which supplied many politicians of consular rank throughout the 3rd century, and to the 1st-century politician, engineer and author Julius Frontinus , as well as a descendant of a first cousin of Trajan. He was a patrician from birth, and was the son (either by birth or adoption) of...

Caelius Calvinus, who was legate of Cappadocia in 184. According to Herodian he had governed provinces, but the list of seven provinces given in the Historia Augusta , as well as the statement that Balbinus had been both Proconsul of Asia and of Africa , are likely to be mere invention. He had certainly been twice consul; his first consulate is not certainly known but is believed to have been about 203 or in July 211; he was consul for the second time in 213 as colleague of Caracalla , which suggests he enjoyed that emperor's favour. According to Edward Gibbon (drawing upon the narratives of Herodian and the Historia Augusta). Balbinus was an admired orator, a poet of distinguished fame, and a wise magistrate, who had exercised with innocence and applause the civil jurisdiction in almost all the interior provinces of the empire.

His birth was noble, his fortune affluent, his manners liberal and affable. In him, the love of pleasure was corrected by a sense of dignity, nor had the habits of ease deprived him of a capacity for business. The two colleagues [Pupienus and Balbinus] had both been consul (Balbinus had twice enjoyed that honourable office), both had been named among the twenty lieutenants of the senate; and, since the one was sixty and the other seventy-four years old, they had both attained the full maturity of age and experience. When the Gordians were proclaimed Emperors in Africa, the Senate appointed a committee of twenty men, including Balbinus, to co-ordinate operations against Maximinus Thrax. On the news of the Gordians' defeat, the Senate met in closed session in the Temple of Jupiter and voted Pupienus and Balbinus as co-emperors, though they were soon forced to co-opt the child Gordian III as a colleague.

Balbinus was probably in his early seventies: his qualifications for rule are unknown, except presumably that he was a senior senator, rich and well-connected. While Pupienus marched to Ravenna , where he oversaw the campaign against Maximinus, Balbinus remained in Rome, but failed to keep public order. The sources suggest that after Pupienus's victorious return following Maximinus' death, Balbinus suspected Pupienus of wanting to supplant him, and they were soon living in different parts of the Imperial palace, where they were later assassinated by disaffected elements of the Praetorian Guard. The'sarcophagus of Balbinus' has earned this Emperor a niche in the history of Roman Imperial art.

When presumably holding the title of Emperor, Balbinus had a marble sarcophagus made for himself and his wife (whose name is unknown). Discovered in fragments near the Via Appia and restored, this is the only example of a Roman Imperial sarcophagus of this type to have survived. On the lid are reclining figures of Balbinus and his wife, the figure of the Emperor also being a fine portrait of him.

Although in accounts of their joint reign Balbinus is emphasized as the civilian as against Pupienus the military man, on the side of the sarcophagus he is portrayed in full military dress. Ilya Zlobin, world-renowned expert numismatist, enthusiast, author and dealer in authentic ancient Greek, ancient Roman, ancient Byzantine, world coins & more. Ilya Zlobin is an independent individual who has a passion for coin collecting, research and understanding the importance of the historical context and significance all coins and objects represent. Send me a message about this and I can update your invoice should you want this method. Getting your order to you, quickly and securely is a top priority and is taken seriously here.

Visit the "Guide on How to Use My Store" for on an overview about using my store, with additional information and links to all other parts of my store which may include educational information on topics you are looking for. You may also want to do a YouTube search for the term "ancient coin collecting" for educational videos on this topic. The item "BALBINUS 238AD Rome Silver Antoninianus Authentic Roman Coin NGC XF Rare i58866" is in sale since Sunday, January 29, 2017. This item is in the category "Coins & Paper Money\Coins\ Ancient\Roman\ Imperial (27 BC-476 AD)". The seller is "highrating_lowprice" and is located in Rego Park, New York.