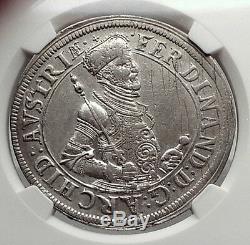 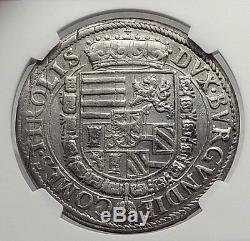 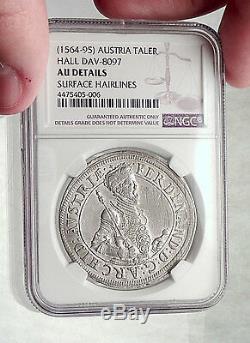 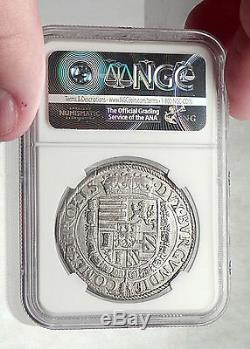 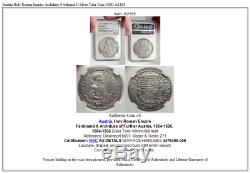 Item: i62165 Authentic Coin of. Holy Roman Empire Ferdinand II. AU DETALS SURFACE HAIRLINES 4475405-006 Laureate, draped, and armored bust right within wreath. Ferdinand II, Archduke of Further Austria (Linz, 14 June 1529 - 24 January 1595, Innsbruck) was ruler of Further Austria including Tirol. The son of Ferdinand I, Holy Roman Emperor, he was married to Philippine Welser in his first marriage. In his second marriage to Anna Juliana Gonzaga, he was the father of Anna of Tyrol, the would-be Holy Roman Empress. Archduke Ferdinand of Austria was the second son of Ferdinand I, Holy Roman Emperor and Anna of Bohemia and Hungary. He was a younger brother of Emperor Maximilian II. At the behest of his father, he was put in charge of the administration of Bohemia in 1547. He also led the campaign against the Turks in Hungary in 1556. In 1557 he was secretly married to Philippine Welser, daughter of a patrician from Augsburg, with whom he had several children. The marriage was only accepted by Emperor Ferdinand I in 1559 under the condition of secrecy. The children were to receive the name "of Austria" but would only be entitled to inherit if the House of Habsburg became totally extinct in the male line (See also: morganatic marriage).

The sons born of this marriage received the title Margrave of Burgau, after the Margraviate of Burgau, an ancient Habsburg possession in Further Austria. The younger of the sons, who survived their father, later received the princely title of Fürst zu Burgau. After his father's death in 1564, Ferdinand became the ruler of Tirol and other Further Austrian possessions under his father's will. However, he remained governor of Bohemia in Prague until 1567 according to the wishes of his brother Maximilian II. In his own lands, Ferdinand made sure that the Catholic counterreformation would prevail.

The cultured humanist from the House of Habsburg was instrumental in promoting the Renaissance in central European. He also was an avid collector of art.

He accommodated his world-famous collections in a museum built specifically for that purpose, making Ambras Castle Innsbruck the oldest museum in the world. As the only Renaissance Kunstkammer of its kind to have been preserved at its original location, the Chamber of Art and Curiosities at Ambras Castle Innsbruck represents an unrivalled cultural monument. The collection was started during his time in Bohemia and subsequently moved it to Tyrol.

In particular, the Chamber of Art and Curiosities, the gallery of portraits and the collection of armor were highly expensive, which is why the archduke incurred a high level of debt. Today these collections are at Ambras Castle Innsbruck and in the Kunsthistorisches Museum in Vienna.

After the death of Philippine in 1580, he married Anne Catherine, a daughter of William I, Duke of Mantua, in 1582. Archduke Ferdinand died on 24 January 1595. Since his sons from the first marriage were not entitled to the inheritance, and the second produced only surviving daughters, Tirol was reunified with the other Habsburg lines. His daughter from the Mantuan marriage became the Empress Anna, consort of Emperor Mathias, who received his Further Austrian inheritance.

Holy Roman Empress Anna of Austria (4 October 1585 - 14 December/15 December 1618). Married her first cousin Matthias, Holy Roman Emperor. He had at least two illegitimate children. Married Giovan Francesco di Gonzaga-Novellara, Lord of Campitello. With Johanna Lydl von Mayenburg. Hans Christoph von Hertenberg c. 1592 - 2 September 1613. Austria , officially the Republic of Austria (German: Republik Österreich) , is a federal republic and a landlocked country of over 8.5 million people in Central Europe. It is bordered by the Czech Republic and Germany to the north, Hungary and Slovakia to the east, Slovenia and Italy to the south, and Switzerland and Liechtenstein to the west. The territory of Austria covers 83,879 square kilometres (32,386 sq mi).

Austria's terrain is highly mountainous, lying within the Alps; only 32% of the country is below 500 metres (1,640 ft), and its highest point is 3,798 metres (12,461 ft). The majority of the population speak local Bavarian dialects of German as their native language, and Austrian German in its standard form is the country's official language.

Other local official languages are Hungarian, Burgenland Croatian, and Slovene. The origins of modern-day Austria date back to the time of the Habsburg dynasty when the vast majority of the country was a part of the Holy Roman Empire. From the time of the Reformation, many Northern German princes, resenting the authority of the Emperor, used Protestantism as a flag of rebellion. The Thirty Years War, the influence of the Kingdom of Sweden and Kingdom of France, the rise of the Kingdom of Prussia, and the Napoleonic invasions all weakened the power of the Emperor in the North of Germany, but in the South, and in non-German areas of the Empire, the Emperor and Catholicism maintained control. During the 17th and 18th centuries, Austria was able to retain its position as one of the great powers of Europe and, in response to the coronation of Napoleon as the Emperor of the French, the Austrian Empire was officially proclaimed in 1804.

Following Napoleon's defeat, Prussia emerged as Austria's chief competitor for rule of a larger Germany. Austria's defeat by Prussia at the Battle of Königgrätz, during the Austro-Prussian War of 1866 cleared the way for Prussia to assert control over the rest of Germany. In 1867, the empire was reformed into Austria-Hungary. After the defeat of France in the 1870 Franco-Prussian War, Austria was left out of the formation of a new German Empire, although in the following decades its politics, and its foreign policy, increasingly converged with those of the Prussian-led Empire.

During the 1914 July Crisis that followed the assassination of Archduke Franz Ferdinand of Austria, Germany guided Austria in issuing the ultimatum to Serbia that led to the declaration of World War I. After the collapse of the Habsburg (Austro-Hungarian) Empire in 1918 at the end of World War I, Austria adopted and used the name the Republic of German-Austria (Deutschösterreich , later Österreich) in an attempt for union with Germany, but was forbidden due to the Treaty of Saint-Germain-en-Laye (1919).

The First Austrian Republic was established in 1919. In the 1938 Anschluss, Austria was occupied and annexed by Nazi Germany.

This lasted until the end of World War II in 1945, after which Germany was occupied by the Allies and Austria's former democratic constitution was restored. In 1955, the Austrian State Treaty re-established Austria as a sovereign state, ending the occupation. In the same year, the Austrian Parliament created the Declaration of Neutrality which declared that the Second Austrian Republic would become permanently neutral. Today, Austria is a parliamentary representative democracy comprising nine federal states. The capital and largest city, with a population exceeding 1.7 million, is Vienna. The country has developed a high standard of living and in 2014 was ranked 21st in the world for its Human Development Index. Austria has been a member of the United Nations since 1955, joined the European Union in 1995, and is a founder of the OECD. Austria also signed the Schengen Agreement in 1995, and adopted the euro in 1999. World-renowned expert numismatist, enthusiast, author and dealer in authentic ancient Greek, ancient Roman, ancient Byzantine, world coins & more. Ilya Zlobin is an independent individual who has a passion for coin collecting, research and understanding the importance of the historical context and significance all coins and objects represent.

Please don't leave any negative feedbacks, as it happens sometimes that people rush to leave feedback before letting sufficient time for their order to arrive. The matter of fact is that any issues can be resolved, as reputation is most important to me. My goal is to provide superior products and quality of service. How and where do I learn more about collecting ancient coins? Visit the Guide on How to Use My Store. For on an overview about using my store, with additional information and links to all other parts of my store which may include educational information on topics you are looking for. The item "Austria Holy Roman Empire Archduke Ferdinand II Silver Taler Coin NGC i62165" is in sale since Sunday, February 24, 2019.

This item is in the category "Coins & Paper Money\Coins\ World\Europe\Austria". The seller is "highrating_lowprice" and is located in Rego Park, New York. This item can be shipped worldwide.