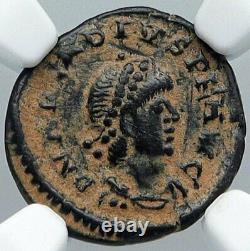 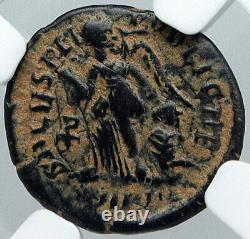 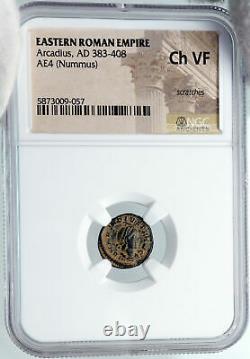 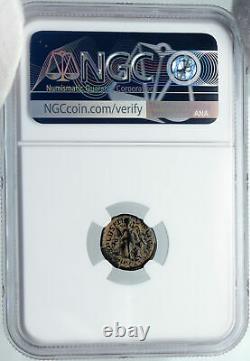 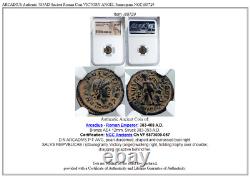 SALVS REIPVBLICAE / (staurogram), Victory (angel) walking right, holding trophy over shoulder, dragging a captive behind her. The Staurogram meaning monogram of the cross, from the Greek sta???? Cross , or Monogrammatic Cross or Tau-Rho symbol, is composed by a tau? The Staurogram was first used to abbreviate the Greek word for cross in very early New Testament manuscripts such as P66, P45 and P75, almost like a nomen sacrum, and may visually have represented Jesus on the cross. Ephrem the Syrian in the 4th-century explained these two united letters stating that the tau refers to the cross, and the rho refers to the Greek word "help" which has the numerological value in Greek of 100 as the letter rho has.

In such a way the symbol expresses the idea that the Cross saves. The two letters tau and rho can also be found separately as symbols on early Christian ossuaries. The tau was considered a symbol of salvation due to the identification of the tau with the sign which in Ezekiel 9:4 was marked on the forehead of the saved ones, or due to the tau-shaped outstretched hands of Moses in Exodus 17:11. The rho by itself can refer to Christ as Messiah because Abraham, taken as symbol of the Messiah, generated Isaac according to a promise made by God when he was one hundred years old, and 100 is the value of rho. The Monogrammatic Cross was later seen also as a variation of the Chi Rho symbol, and it spread over Western Europe in the 5th and 6th centuries. In ancient Roman religion, Victoria or Victory was the personified goddess of victory. She is the Roman equivalent of the Greek goddess Nike, and was associated with Bellona. She was adapted from the Sabine agricultural goddess Vacuna and had a temple on the Palatine Hill.

The goddess Vica Pota was also sometimes identified with Victoria. Unlike the Greek Nike, the goddess Victoria (Latin for "victory") was a major part of Roman society.

Multiple temples were erected in her honor. When her statue was removed in 382 CE by Emperor Gratianus there was much anger in Rome. She was normally worshiped by triumphant generals returning from war. Also unlike the Greek Nike, who was known for success in athletic games such as chariot races, Victoria was a symbol of victory over death and determined who would be successful during war. Victoria appears widely on Roman coins, jewelry, architecture, and other arts. She is often seen with or in a chariot, as in the late 18th-century sculpture representing Victory in a quadriga on the Brandenburg Gate in Berlin, Germany; "Il Vittoriano" in Rome has two.

Winged figures, very often in pairs, representing victory and referred to as "victories", were common in Roman official iconography, typically hovering high in a composition, and often filling spaces in spandrels or other gaps in architecture. These represent the spirit of victory rather than the goddess herself. They continued to appear after Christianization of the Empire, and slowly mutated into Christian angels. The symbolism of angels has been adopted from the ancient Roman goddess of victory by the early Christians. The goddess transformed into what is known by the Christians as angels via the Christianization of the Roman empire.

This is evidenced by many coins still depicting victory, yet of the time period where Christianity was already the official religion of the Roman empire. She appears along with symbols such as a Christogram (also known as a Chi-Rho which is a monogram of Jesus Christ), Staurogram, and the cross, attributing to it's Christian symbolism. An angel is a purely spiritual being found in various religions and mythologies. In Abrahamic religions and Zoroastrianism, angels are often depicted as benevolent celestial beings who act as intermediaries between God or Heaven and Earth, or as guardian spirits or a guiding influence. Other roles of angels include protecting and guiding human beings, and carrying out God's tasks.

The term "angel" has also been diversified to various notions of spirits or figures found in many other religious traditions. The theological study of angels is known as "angelology". In art, angels are often depicted with bird-like wings on their back, a halo, robes and various forms of glowing light. Arcadius Latin: Flavius Arcadius Augustus ; Greek:???? 1 January 377 - 1 May 408 was Byzantine Emperor from 383 to 408. He was the eldest son of Theodosius I and his first wife Aelia Flaccilla, and brother of the Western Emperor Honorius. A weak ruler, his reign was dominated by a series of powerful ministers and by his wife, Aelia Eudoxia. Arcadius was born in Hispania, the elder son of Theodosius I and Aelia Flaccilla, and brother of Honorius, who would become a Western Roman Emperor. His father declared him an Augustus and co-ruler for the Eastern half of the Empire in January 383. His younger brother was also declared Augustus in 393, for the Western half. As emperors, Honorius was under the control of the Romanized Vandal magister militum Flavius Stilicho while Arcadius was dominated by one of his ministers, Rufinus. Stilicho is alleged by some to have wanted control of both Emperors, and is supposed to have had Rufinus assassinated by Gothic mercenaries in 395; though definite proof of Stilicho's involvement in the assassination is lacking, the intense competition and political jealousies engendered by the two figures compose the main thread of the first part of Arcadius' reign. Arcadius' new advisor, the eunuch Eutropius, simply took Rufinus' place as the power behind the Eastern imperial throne. Arcadius was also dominated by his wife Aelia Eudoxia, who convinced her husband to dismiss Eutropius, who was holding the consulate, at the height of his power, in 399. That same year, on 13 July, Arcadius issued an edict ordering that all remaining non-Christian temples should be immediately demolished. Eudoxia's influence was strongly opposed by John Chrysostom, the Patriarch of Constantinople, who felt that she had used her family's wealth to gain control over the Emperor. Eudoxia used her influence to have Chrysostom deposed in 404, but she died later that year. Eudoxia gave to Arcadius four children: three daughters, Pulcheria, Arcadia and Marina, and one son, Theodosius, the future Emperor Theodosius II.

Arcadius was dominated for the rest of his rule by Anthemius, the Praetorian Prefect, who made peace with Stilicho in the West. Arcadius himself was more concerned with appearing to be a pious Christian than he was with political or military matters, and he died, only nominally in control of his Empire, in 408. In this reign of a weak Emperor dominated by court politics, a major theme was the ambivalence felt by prominent individuals and the court parties that formed and regrouped round them towards barbarians, which in Constantinople at this period meant Goths.

In the well-documented episode that revolved around Gainas, a number of Gothic foederati stationed in the capital were massacred, the survivors fleeing under the command of Gainas to Thrace, where they were tracked down by imperial troops and slaughtered and Gainas dispatched. The episode has been traditionally interpreted as a paroxysm of anti-barbarian reaction that served to stabilize the East. The main source for the affair is a mythology à clef by Synesius of Cyrene, Aegyptus sive de providentia, (400) an Egyptianising allegory that embodies a covert account of the events, the exact interpretation of which continues to baffle scholars.

Synesius' De regno, which claims to be addressed to Arcadius himself, contains a tirade against Goths. A new forum was built in the name of Arcadius, on the seventh hill of Constantinople, the Xerolophos, in which a column was begun to commemorate his'victory' over Gainas (although the column was only completed after Arcadius' death by Theodosius II). The Pentelic marble portrait head of Arcadius (now in the Istanbul Archaeology Museum) was discovered in Istanbul close to the Forum Tauri, in June 1949, in excavating foundations for new buildings of the University at Beyazit. The neck was designed to be inserted in a torso, but no statue, base or inscription was found. The diadem is a fillet with rows of pearls along its edges and a rectangular stone set about with pearls over the young Emperor's forehead. World-renowned expert numismatist, enthusiast, author and dealer in authentic ancient Greek, ancient Roman, ancient Byzantine, world coins & more.