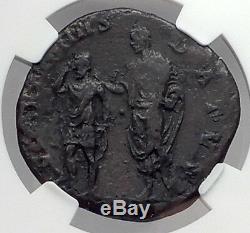 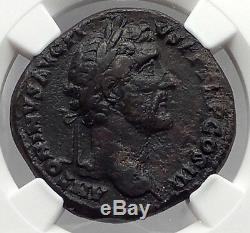 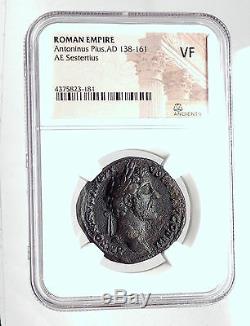 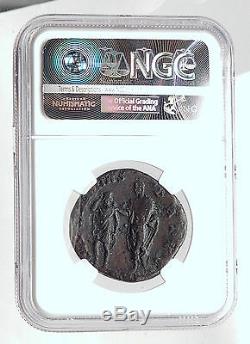 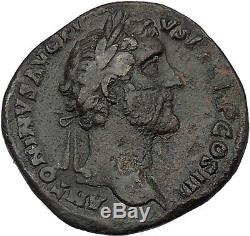 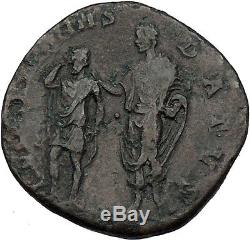 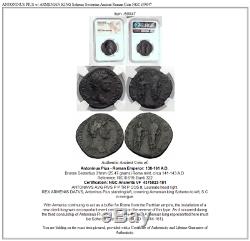 Reference: RIC III 619; Banti 322 Certification: NGC Ancients VF 4375823-181 ANTONINVS AVG PIVS P P TR P COS III, Laureate head right. REX ARMENIIS DATVS, Antoninus Pius standing left, crowning Armenian king Sohemo to left; S C in exergue. With Armenia continuing to act as a buffer for Rome from the Parthian empire, the installation of a new client-king was an important event celebrated on the reverse of this type. As it occurred during the third consulship of Antoninus Pius (AD 140-144), the new Armenian king represented here must be Sohemo (first reign, circa AD 140/44-161). Antoninus Pius - 138-161 A.

(under Hadrian) Augustus: 138-161 A. Titus Aurelius Fulvus Boionius Arrius Antoninus (19 September 86 7 March 161), generally known in English as Antoninus Pius was Roman emperor from 138 to 161. He was the fourth of the Five Good Emperors and a member of the Aurelii.

He did not possess the sobriquet " Pius " until after his accession to the throne. Almost certainly, he earned the name "Pius" because he compelled the Senate to deify his adoptive father Hadrian ; the Historia Augusta , however, suggests that he may have earned the name by saving senators sentenced to death by Hadrian in his later years. The item "ANTONINUS PIUS with ARMENIAN KING Sohemo Sestertius Ancient Roman Coin NGC i59847" is in sale since Saturday, March 4, 2017.