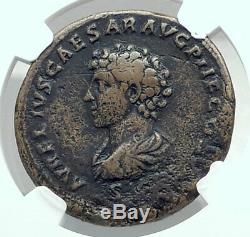 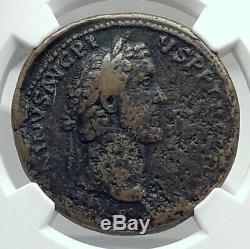 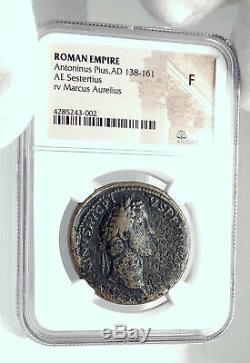 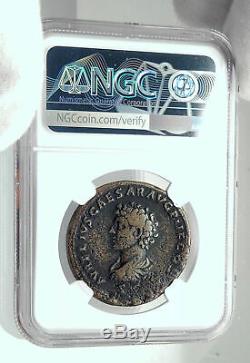 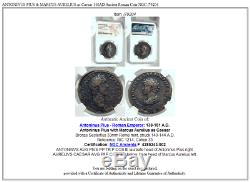 F 4285243-002 ANTONINVS AVG PIVS PP TR P COS III, laureate head of Antoninus Pius right. AVRELIVS CAESAR AVG PII F COS, SC below, bare head of Marcus Aurelius left. Marcus Aurelius (Latin: Marcus Aurelius Antoninus Augustus ; 26 April 121 - 17 March 180 AD) was Emperor of Rome from 161 to 180. He ruled with Lucius Verus as co-emperor from 161 until Verus' death in 169. Marcus Aurelius was the last of the so-called Five Good Emperors. He was a practitioner of Stoicism, and his untitled writing, commonly known as Meditations , is a significant source of the modern understanding of ancient Stoic philosophy, and is considered by many commentators to be one of the greatest works of philosophy.

During his reign, the Roman Empire defeated a revitalized Parthian Empire in the East: Aurelius' general Avidius Cassius sacked the capital Ctesiphon in 164. In central Europe, Aurelius fought the Marcomanni, Quadi, and Sarmatians with success during the Marcomannic Wars, although the threat of the Germanic peoples began to represent a troubling reality for the Empire. A revolt in the East led by Avidius Cassius failed to gain momentum and was suppressed immediately.

Persecution of Christians increased during his reign. Aurelius' Meditations , written in Greek while on campaign between 170 and 180, is still revered as a literary monument to a philosophy of service and duty, describing how to find and preserve equanimity, a state of psychological stability and composure, in the midst of conflict by following nature as a source of guidance and inspiration.

His death in 180 is widely cited as the end of the Pax Romana and the increasing instability in the west that followed has traditionally been seen as the beginning of the eventual Fall of the Western Roman Empire. Titus Aurelius Fulvus Boionius Arrius Antoninus (19 September 86 - 7 March 161), generally known in English as Antoninus Pius was Roman emperor from 138 to 161.

He was the fourth of the Five Good Emperors and a member of the Aurelii. He did not possess the sobriquet "Pius" until after his accession to the throne. Almost certainly, he earned the name "Pius" because he compelled the Senate to deify his adoptive father Hadrian; the Historia Augusta, however, suggests that he may have earned the name by saving senators sentenced to death by Hadrian in his later years. He was the son and only child of Titus Aurelius Fulvus, consul in 89 whose family came from Nemausus (modern Nîmes) and was born near Lanuvium and his mother was Arria Fadilla. Antoninus' father and paternal grandfather died when he was young and he was raised by Gnaeus Arrius Antoninus, his maternal grandfather, a man of integrity and culture and a friend of Pliny the Younger.

His mother married to Publius Julius Lupus (a man of consular rank), Suffect Consul in 98, and bore him a daughter called Julia Fadilla. As a private citizen between 110 and 115, he married Annia Galeria Faustina the Elder. They had a very happy marriage.

She was the daughter of consul Marcus Annius Verus and Rupilia Faustina (a half-sister to Roman Empress Vibia Sabina). Faustina was a beautiful woman, renowned for her wisdom. She spent her whole life caring for the poor and assisting the most disadvantaged Romans. Having filled with more than usual success the offices of quaestor and praetor, he obtained the consulship in 120; he was next appointed by the Emperor Hadrian as one of the four proconsuls to administer Italia, then greatly increased his reputation by his conduct as proconsul of Asia. He acquired much favor with the Emperor Hadrian, who adopted him as his son and successor on 25 February, 138, after the death of his first adopted son Lucius Aelius, on the condition that Antoninus would in turn adopt Marcus Annius Verus, the son of his wife's brother, and Lucius, son of Aelius Verus, who afterwards became the emperors Marcus Aurelius and Lucius Verus (colleague of Marcus Aurelius).

In marked contrast to his predecessors Trajan and Hadrian, Antoninus was not a military man. One modern scholar has written "It is almost certain not only that at no time in his life did he ever see, let alone command, a Roman army, but that, throughout the twenty-three years of his reign, he never went within five hundred miles of a legion". His reign was the most peaceful in the entire history of the Principate; while there were several military disturbances throughout the Empire in his time, in Mauretania, Iudaea, and amongst the Brigantes in Britannia, none of them are considered serious. The unrest in Britannia is believed to have led to the construction of the Antonine Wall from the Firth of Forth to the Firth of Clyde, although it was soon abandoned. He was virtually unique among emperors in that he dealt with these crises without leaving Italy once during his reign, but instead dealt with provincial matters of war and peace through their governors or through imperial letters to the cities such as Ephesus (of which some were publicly displayed).

This style of government was highly praised by his contemporaries and by later generations. German historian Ernst Kornemann has had it in his Römische Geschichte 2 vols. Bengtson, Stuttgart 1954 that the reign of Antoninus comprised "a succession of grossly wasted opportunities, " given the upheavals that were to come. There is more to this argument, given that the Parthians in the East were themselves soon to make no small amount of mischief after Antoninus' passing. Kornemann's brief is that Antoninus might have waged preventive wars to head off these outsiders.

Scholars place Antoninus Pius as the leading candidate for fulfilling the role as a friend of Rabbi Judah the Prince. According to the Talmud (Avodah Zarah 10a-b), Rabbi Judah was very wealthy and greatly revered in Rome. He had a close friendship with "Antoninus", possibly Antoninus Pius, who would consult Rabbi Judah on various worldly and spiritual matters. After the longest reign since Augustus (surpassing Tiberius by a couple of months), Antoninus died of fever at Lorium in Etruria, about twelve miles (19 km) from Rome, on 7 March 161, giving the keynote to his life in the last word that he uttered when the tribune of the night-watch came to ask the password-"aequanimitas" (equanimity).

His body was placed in Hadrian's mausoleum, a column was dedicated to him on the Campus Martius, and the temple he had built in the Forum in 141 to his deified wife Faustina was rededicated to the deified Faustina and the deified Antoninus. The only account of his life handed down to us is that of the Augustan History , an unreliable and mostly fabricated work. Antoninus is unique among Roman emperors in that he has no other biographies.

Historians have therefore turned to public records for what details we know. Antoninus in many ways was the ideal of the landed gentleman praised not only by ancient Romans, but also by later scholars of classical history, such as Edward Gibbon or the author of the article on Antoninus Pius in the ninth edition of the Encyclopedia Britannicaca. A few months afterwards, on Hadrian's death, he was enthusiastically welcomed to the throne by the Roman people, who, for once, were not disappointed in their anticipation of a happy reign. For Antoninus came to his new office with simple tastes, kindly disposition, extensive experience, a well-trained intelligence and the sincerest desire for the welfare of his subjects. Instead of plundering to support his prodigality, he emptied his private treasury to assist distressed provinces and cities, and everywhere exercised rigid economy (hence the nickname "cummin-splitter"). Instead of exaggerating into treason whatever was susceptible of unfavorable interpretation, he spurned the very conspiracies that were formed against him into opportunities for demonstrating his clemency. Instead of stirring up persecution against the Christians, he extended to them the strong hand of his protection throughout the empire. Rather than give occasion to that oppression which he regarded as inseparable from an emperor's progress through his dominions, he was content to spend all the years of his reign in Rome, or its neighborhood. World-renowned expert numismatist, enthusiast, author and dealer in authentic ancient Greek, ancient Roman, ancient Byzantine, world coins & more. Ilya Zlobin is an independent individual who has a passion for coin collecting, research and understanding the importance of the historical context and significance all coins and objects represent. Send me a message about this and I can update your invoice should you want this method. Getting your order to you, quickly and securely is a top priority and is taken seriously here.

Visit the "Guide on How to Use My Store". For on an overview about using my store, with additional information and links to all other parts of my store which may include educational information on topics you are looking for. The item "ANTONINUS PIUS & MARCUS AURELIUS as Caesar 140AD Ancient Roman Coin NGC i79204" is in sale since Monday, July 15, 2019.