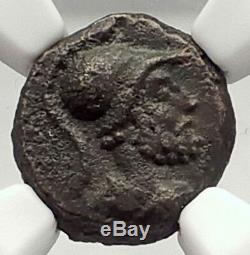 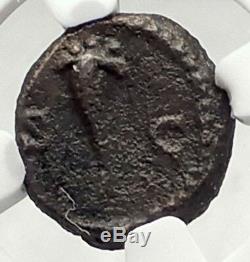 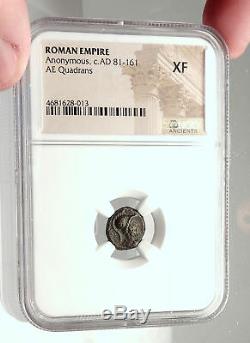 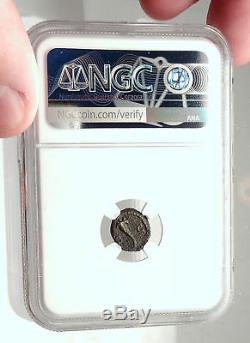 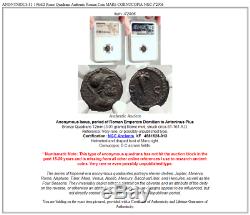 The series of Imperial-era anonymous quadrantes portrays eleven deities: Jupiter, Minerva, Roma, Neptune, Tiber, Mars, Venus, Apollo, Mercury, Bacchus/Liber, and Hercules, as well as the Four Seasons. They invariably depict either a portrait on the obverse and an attribute of the deity on the reverse, or otherwise an attribute on either side. These designs appear to be influenced, but not directly copied from, earlier designs of the Republican period. Mars was the Roman god of war, the son of Juno and Jupiter, husband of Bellona, and the lover of Venus. He was the most prominent of the military gods that were worshipped by the Roman legions.

The martial Romans considered him second in importance only to Jupiter (their main god). His festivals were held in March (named for him) and October. As the word Mars has no Indo-European derivation, it is most likely the Latinised form of the agricultural Etruscan god Maris. Initially Mars was a Roman god of fertility and vegetation and a protector of cattle, fields and boundaries and farmers.

In the second century BC, the conservative Cato the Elder advised "For your cattle, for them to be healthy, make this sacrifice to Mars Silvanus you must make this sacrifice each year". Mars later became associated with battle as the growing Roman Empire began to expand, and he came to be identified with the Greek god Ares. Unlike his Greek counterpart, Mars was generally revered and rivaled Jupiter as the most honoured god. He was also the tutelary god of the city of Rome.

As he was regarded as the legendary father of Rome's founder, Romulus, it was believed that all Romans were descendants of Mars. The cornucopia (from Latin cornu copiae) or horn of plenty is a symbol of abundance and nourishment, commonly a large horn-shaped container overflowing with produce, flowers or nuts. The horn originates from classical antiquity, it has continued as a symbol in Western art, and it is particularly associated with the Thanksgiving holiday in North America. Mythology offers multiple explanations of the origin of the cornucopia.

One of the best-known involves the birth and nurturance of the infant Zeus, who had to be hidden from his devouring father Kronus. In a cave on Mount Ida on the island of Crete, baby Zeus was cared for and protected by a number of divine attendants, including the goat Amalthea ("Nourishing Goddess"), who fed him with her milk. The suckling future king of the gods had unusual abilities and strength, and in playing with his nursemaid accidentally broke off one of her horns, which then had the divine power to provide unending nourishment, as the foster mother had to the god. In another myth, the cornucopia was created when Heracles (Roman Hercules) wrestled with the river god Achelous and wrenched off one of his horns; river gods were sometimes depicted as horned.

This version is represented in the Achelous and Hercules mural painting by the American Regionalist artist Thomas Hart Benton. The cornucopia became the attribute of several Greek and Roman deities, particularly those associated with the harvest, prosperity, or spiritual abundance, such as personifications of Earth (Gaia or Terra); the child Plutus, god of riches and son of the grain goddess Demeter; the nymph Maia; and Fortuna, the goddess of luck, who had the power to grant prosperity. In Roman Imperial cult, abstract Roman deities who fostered peace (pax Romana) and prosperity were also depicted with a cornucopia, including Abundantia, "Abundance" personified, and Annona, goddess of the grain supply to the city of Rome.

Pluto, the classical ruler of the underworld in the mystery religions, was a giver of agricultural, mineral and spiritual wealth, and in art often holds a cornucopia to distinguish him from the gloomier Hades, who holds a drinking horn instead. World-renowned expert numismatist, enthusiast, author and dealer in authentic ancient Greek, ancient Roman, ancient Byzantine, world coins & more.

The item "ANONYMOUS 81-196AD Rome Quadrans Authentic Roman Coin MARS CORNUCOPIA NGC i72906" is in sale since Wednesday, October 17, 2018. This item is in the category "Coins & Paper Money\Coins\ Ancient\Roman\ Imperial (27 BC-476 AD)". The seller is "highrating_lowprice" and is located in Rego Park, New York.