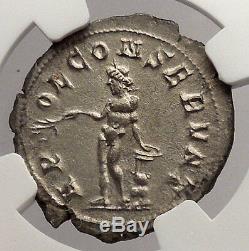 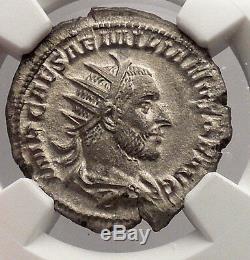 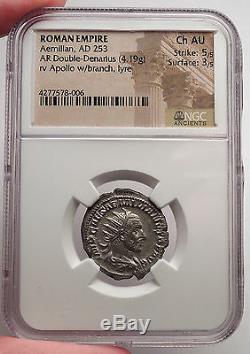 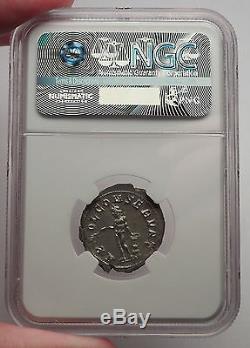 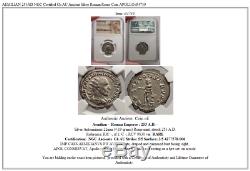 Item: i54739 Authentic Ancient Coin of. Aemilian - Roman Emperor : 253 A. Silver Antoninianus 22mm (4.19 grams) Rome mint, struck 253 A. Reference: RIC -, cf 1; C -; RCV 9830 var. RARE Certification: NGC Ancients Ch AU Strike: 5/5 Surface: 3/5 4277578-006 IMP CAES AEMILIANVS P F AVG, radiate, draped and cuirassed bust facing right. APOL CONSERVAT, Apollo standing left, holding a branch and resting on a lyre set on a rock. In Greek and Roman mythology , Apollo , is one of the most important and diverse of the Olympian deities. The ideal of the kouros (a beardless youth), Apollo has been variously recognized as a god of light and the sun; truth and prophecy; archery ; medicine and healing; music, poetry, and the arts; and more. Apollo is the son of Zeus and Leto , and has a twin sister, the chaste huntress Artemis. Apollo is known in Greek-influenced Etruscan mythology as Apulu. Apollo was worshiped in both ancient Greek and Roman religion , as well as in the modern Greco - Roman Neopaganism. As the patron of Delphi (Pythian Apollo), Apollo was an oracular god the prophetic deity of the Delphic Oracle. Medicine and healing were associated with Apollo, whether through the god himself or mediated through his son Asclepius , yet Apollo was also seen as a god who could bring ill-health and deadly plague as well as one who had the ability to cure.

Amongst the god's custodial charges, Apollo became associated with dominion over colonists , and as the patron defender of herds and flocks. As the leader of the Muses (Apollon Musagetes) and director of their choir, Apollo functioned as the patron god of music and poetry. Hermes created the lyre for him, and the instrument became a common attribute of Apollo. Hymns sung to Apollo were called paeans. In Hellenistic times, especially during the third century BCE, as Apollo Helios he became identified among Greeks with Helios , god of the sun , and his sister Artemis similarly equated with Selene , goddess of the moon.

In Latin texts, on the other hand, Joseph Fontenrose declared himself unable to find any conflation of Apollo with Sol among the Augustan poets of the first century, not even in the conjurations of Aeneas and Latinus in Aeneid XII (161215). Apollo and Helios/Sol remained separate beings in literary and mythological texts until the third century CE.

Marcus Aemilius Aemilianus Girba , c. 207/213 Spoletium , 253, commonly known as Aemilian , was Roman Emperor for three months in 253. Commander of the Moesian troops, he obtained an important victory against the invading Goths and was, for this reason, acclaimed emperor by his army. He then moved quickly to Italy, where he defeated emperor Trebonianus Gallus , only to be killed by his own men when another general, Valerian , proclaimed himself emperor and moved against Aemilian with a larger army. Aemilian was born in the Roman province of Africa.

According to the 4th century source Epitome de Caesaribus , he was born at Girba (modern Djerba , an island off the coast of Tunisia) and was a Moor ; a reference in the same source hints that he was born around 207. The 12th century historian Joannes Zonaras , who calls him a Libyan (that is, coming from western Egypt-eastern Libya) rather than a Moor, and another chronicle of the 13th century hold that he was forty at the time of his death in 253. As regards his lineage, there are two versions, both exaggerated: while Eutropius and his translator Paeanius probably defamate a failed usurper when they tell that he was from an insignificant family, John of Antioch may refer bits of Aemilian's propaganda when he tells that the usurper used his ancestry to take the power. Aemilian married Cornelia Supera , a woman of African origin; the year of their marriage is unknown, but being both from the same place, it is possible they married before Aemilian left Africa. During the reign of Trebonianus Gallus and his son Volusianus (251253), Aemilian was sent to the Balkans to command an army.

His primary responsibility was to assure peace along the Danube frontier, which had been subject to several attacks by the Goths led by king Cniva. Gallus secured the throne after the death of emperor Decius at the hands of Cniva in the battle of Abrittus (251), and later had to manage an outbreak of plague that devastated Rome. He was not popular with the army, mainly due to humiliating treaties signed in 251 with the Goths and King Shapur I of Persia who attacked Syria.

According to John of Antioch, upon his appointment to the Moesian command, Aemilian was already envious of Gallus and plotted treachery against him. He was also an opponent of the Roman Senate ; and his seditious plans are confirmed by Jerome and Jordanes. Victory against the Goths, overthrow of Gallus, short rule and death of Aemilian. Aemilian had command of the army assigned to defend the area. However, the recent defeat at the battle of Abrittus put his troops on edge.

Aemilian exhorted them, reminding them of Roman honour (according to Zosimus) and promising tribute from the Goths (according to Zonaras). The Romans took the Goths by surprise, killing most of them, followed by an invasion of their territory which resulted in booty and the liberation of prisoners. The Roman soldiers, gathered by Aemilian, acclaimed him Emperor. Jordanes claims, however, that Aemilian's troops plundered Roman territory, rather than keep the tribute of the Goths. With his few men, Aemilian could hardly wait for the legitimate emperor Gallus to gather his forces, so he left his province unguarded and, with all his men, moved quickly towards Rome , to meet his opponent before he could receive reinforcements.

While Aemilian descended upon Rome along the Flaminian Way , Trebonianus Gallus and his son and colleague Volusianus had him proclaimed "enemy of the State" by the Roman senate , then exited Rome to meet the usurper; this strategy is a clue that Aemilian's army was smaller than theirs, as it is probable that they did not expect the reinforcements to come in time, but trusted their larger army to win the clash. The two armies met at Interamna Nahars (modern Terni), at the southern end of the eastern branch of the Flaminia, and Aemilian won the battle; Gallus and Volusianus fled with few followers towards north, probably to gather time before the arrival of the reinforcements, but at Forum Flaminii (modern San Giovanni Profiamma), on the western branch of Flaminia, they were killed by some of their own guards, who thought that their betrayal could earn them a reward. Aemilian moved towards Rome; here the Roman senate , after a short opposition, decided to recognize him emperor. According to some sources, after his recognition Aemilian wrote to the Senate, promising to fight for the Empire in Thrace and against Persia, and to relinquish his power to the Senate, of which he considered himself a general. Aemilian received the titles of Pius , Felix and Pater Patriae , the tribunicia potestas , and was elevated to the rank of pontifex maximus ; however, he was not elevated to consulate (possibly a hint of his non-senatorial birth).

His coinage shows that his propaganda was centred around his capability as military commander; he had been able to defeat the Goths while nobody even believed this possible, and thus he was the right man for the job of restoring the power of the Roman Empire. However, Valerian , the governor of the Rhine provinces, was on his way south with an army, which according to Zosimus , had been called in as a reinforcement by Gallus. Emperor Aemilian's men, fearful of a civil war and Valerian's larger force, mutinied.

Aemilian was killed by them at Spoletium or the Sanguinarium bridge, between Oriculum and Narnia (half way between Spoletium and Rome), and recognised Valerian as the new emperor. After his death, which happened between late July and mid-September, a damnatio memoriae against Aemilian was declared. It is possible that the usurper Silbannacus was an officer left by Aemilian in Rome before moving against Valerian, who later tried to become emperor but then was killed.

The troubled administration of this emperor was perhaps best summed up by Eutropius. Aemilianus came from an extremely insignificant family, his reign was even more insignificant, and he was slain in the third month. What is a certificate of authenticity and what guarantees do you give that the item is authentic?

You will be quite happy with what you get with the COA; a professional presentation of the coin, with all of the relevant information and a picture of the coin you saw in the listing. Is there a number I can call you with questions about my order? When should I leave feedback? Once you receive your order, please leave a positive. Please don't leave any negative feedbacks, as it happens many times that people rush to leave feedback before letting sufficient time for the order to arrive. The matter of fact is that any issues can be resolved, as reputation is most important to me. My goal is to provide superior products and quality of service. The item "AEMILIAN 253AD NGC Certified Ch AU Ancient Silver Roman Rome Coin APOLLO i54739" is in sale since Monday, February 29, 2016. This item is in the category "Coins & Paper Money\Coins\ Ancient\Roman\ Imperial (27 BC-476 AD)". The seller is "highrating_lowprice" and is located in Rego Park, New York. This item can be shipped worldwide.