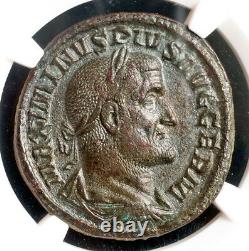 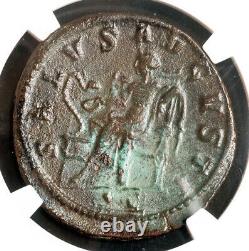 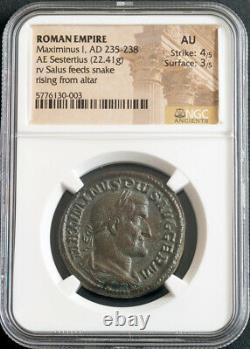 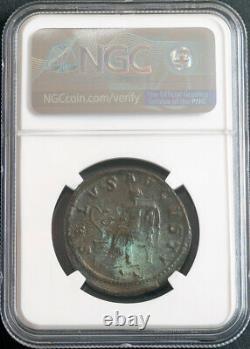 Reverse: Salus seated left, feeding from patera a serpent rising from altar, leaning on chair. R Legend: SALVS AVGVSTI S C. (Latin: salus, "safety", "salvation", "welfare") was a Roman goddess. She was the goddess of safety and well-being (welfare, health and prosperity) of both the individual and the state. She is sometimes equated with the Greek goddess Hygieia, though her functions differ considerably.

Salus is one of the most ancient Roman Goddesses: she is also recorded once as Salus Semonia, a fact that might hint to her belonging to the category of the Semones, such as god Semo Sancus Dius Fidius. This view though is disputes among scholars. The issue is discussed in the section below. The two gods had temples in Rome on the Collis Salutaris and Mucialis respectively, two adjacent hilltops of the Quirinal, located in the regio known as Alta Semita. Her temple, as Salus Publica Populi Romani, was voted in 304 BC, during the Samnite Wars, by dictator Gaius Junius Bubulcus Brutus, dedicated on 5 August 302 and adorned with frescos at the order of Gaius Fabius Pictor. The high antiquity and importance of her cult is testified by the little-known ceremony of the Augurium Salutis, held every year on August 5 for the preservation of the Roman state. Her cult was spread over all Italy. Literary sources record relationships with Fortuna and Spes. She started to be increasingly associated to Valetudo, the Goddess of Personal Health, which was the real romanized name of Hygieia.

Later she become more a protector of personal health. Around 180 BCE sacrificial rites in honour of Apollo, Aesculapius, and Salus took place there (Livius XL, 37). There was a statue to Salus in the temple of Concordia.

She is first known to be associated with the snake of Aesculapius from a coin of 55 BC minted by M. Her festival was celebrated on March 30. Maximinus Thrax ("the Thracian") or Maximinus I Gaius Julius Verus Maximinus. 173 May 238 was Roman emperor from 235 to 238. His father was an accountant in the governor's office and sprang from ancestors who were Carpi (a Dacian tribe), a people whom Diocletian would eventually drive from their ancient abode (in Dacia) and transfer to Pannonia (Roman Antiquities, book XXVIII, Ammianus Marcellinus). Maximinus was the commander of the Legio IV. When Severus Alexander was assassinated by his own troops in 235. The Pannonian army then elected Maximinus emperor.

In 238 (which came to be known as the Year of the Six Emperors), a senatorial revolt broke out, leading to the successive proclamation of Gordian I, Gordian II, Pupienus, Balbinus and Gordian III as emperors in opposition to Maximinus. Maximinus advanced on Rome to put down the revolt, but was halted at Aquileia, where he was assassinated by disaffected elements of the Legio II. Maximinus is described by several ancient sources, though none are contemporary except Herodian's.

He was a so-called barracks emperor of the 3rd century; his rule is often considered to mark the beginning of the Crisis of the Third Century. Maximinus was the first emperor who hailed neither from the senatorial class nor from the equestrian class. The item "238, Roman Empire, Maximinus I.