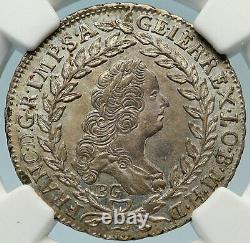 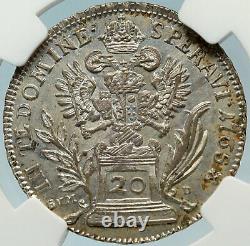 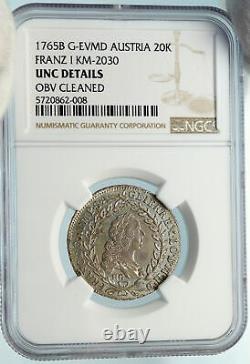 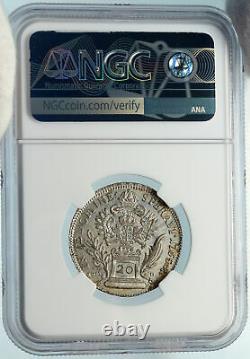 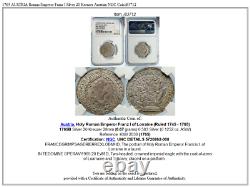 Of Lorraine in a laurel. IN TE·DOMINE· SPERAVI·1965· 20 EvM D, Two-headed, crowned imperial eagle with the coat-of-arms of Loarraine and Tuscany, placed on a platform. Francis I (German: Franz Stefan , French: François Étienne ; 8 December 1708 - 18 August 1765) was Holy Roman Emperor and Grand Duke of Tuscany, though his wife effectively executed the real powers of those positions. With his wife, Maria Theresa, he was the founder of the Habsburg-Lorraine dynasty. From 1728 until 1737 he was Duke of Lorraine.

The duchy and the ducal title to Lorraine and Bar passed to King Louis XV of France upon Leszczynski's death in 1766, though Francis and his successors retained the right to style themselves as dukes of Lorraine and Bar. Francis was born in Nancy, Lorraine (now in France), the oldest surviving son of Leopold, Duke of Lorraine, and his wife Élisabeth Charlotte d'Orléans. He was connected with the Habsburgs through his grandmother Eleonor, daughter of Emperor Ferdinand III. He was very close to his brother Charles and sister Anne Charlotte.

Emperor Charles VI favoured the family, who, besides being his cousins, had served the house of Austria with distinction. He had designed to marry his daughter Maria Theresa to Francis' older brother Leopold Clement. On Leopold Clement's death, Charles adopted the younger brother as his future son-in-law. Francis was brought up in Vienna with Maria Theresa with the understanding that they were to be married, and a real affection arose between them. At the age of 15, when he was brought to Vienna, he was established in the Silesian Duchy of Teschen, which had been mediatised and granted to his father by the emperor in 1722.

Francis succeeded his father as Duke of Lorraine in 1729. In 1731 he was initiated into freemasonry (Grand Lodge of England) by John Theophilus Desaguliers at a specially convened lodge in The Hague at the house of the British Ambassador, Philip Stanhope, 4th Earl of Chesterfield. During a subsequent visit to England, Francis was made a Master Mason at another specially convened lodge at Houghton Hall, the Norfolk estate of British Prime Minister Robert Walpole.

Maria Theresa arranged for Francis to become "Lord Lieutenant" (locumtenens) of Hungary in 1732. He was not excited about this position, but Maria Theresa wanted him closer to her. In June 1732 he agreed to go to Pressburg. When the War of the Polish Succession broke out in 1733, France used it as an opportunity to seize Lorraine, since France's prime minister, Cardinal Fleury, was concerned that, as a Habsburg possession, it would bring Austrian power too close to France. A preliminary peace was concluded in October 1735 and ratified in the Treaty of Vienna in November 1738.

Under its terms, Stanisaw I, the father-in-law of King Louis XV and the losing claimant to the Polish throne, received Lorraine, while Francis, in compensation for his loss, was made heir to the Grand Duchy of Tuscany, which he would inherit in 1737. Although fighting stopped after the preliminary peace, the final peace settlement had to wait until the death of the last Medici Grand Duke of Tuscany, Gian Gastone de' Medici in 1737, to allow the territorial exchanges provided for by the peace settlement to go into effect.

France had demanded that Maria Theresa's fiancé surrender his ancestral Duchy of Lorraine to accommodate the deposed King of Poland. The Emperor considered other possibilities (such as marrying her to the future Charles III of Spain) before announcing the engagement of the couple. If something were to go wrong, Francis would become governor of the Austrian Netherlands. Elisabeth of Parma had also wanted the Grand Duchy of Tuscany for her son Charles III of Spain; Gian Gastone de' Medici was childless and was related to Elisabeth via her great-grandmother Margherita de' Medici. As a result, Elisabeth's sons could claim by right of being a descendant of Margherita. On 31 January 1736 Francis agreed to marry Maria Theresa. He hesitated three times (and laid down the feather before signing).

Especially his mother Élisabeth Charlotte d'Orléans and his brother Prince Charles Alexander of Lorraine were against the loss of Lorraine. On 1 February, Maria Theresa sent Francis a letter: she would withdraw from her future reign, when a male successor for her father appeared. Maria Theresa secured in the Treaty of Füssen his election to the Empire on 13 September 1745, in succession to Charles VII, and she made him co-regent of her hereditary dominions. Francis was well content to leave the wielding of power to his able wife.

He had a natural fund of good sense and brilliant business capacity and was a useful assistant to Maria Theresa in the laborious task of governing the complicated Austrian dominions, but he was not active in politics or diplomacy. However, his wife left him in charge of the financial affairs, which he managed well until his death. Heavily indebted and on the verge of bankruptcy at the end of the Seven Years' War, the Austrian Empire was in a better financial condition than France or England in the 1780s. He also took a great interest in the natural sciences. He was a member of the Freemasons.

Francis was a serial adulterer, many of his affairs well-known and indiscreet, notably one with Maria Wilhelmina, Princess of Auersperg, who was thirty years his junior. This particular affair was remarked upon in the letters and journals of visitors to the court and in those of his children. He died suddenly in his carriage while returning from the opera at Innsbruck on 18 August 1765. He is buried in tomb number 55 in the Imperial Crypt in Vienna.

Francis was succeeded as Emperor by his eldest son, Joseph II, and as Grand Duke of Tuscany by his younger son, Peter Leopold (later Emperor Leopold II). Maria Theresa retained the government of her dominions until her own death in 1780.

Austria , officially the Republic of Austria (German: Republik Österreich) , is a federal republic and a landlocked country of over 8.5 million people in Central Europe. It is bordered by the Czech Republic and Germany to the north, Hungary and Slovakia to the east, Slovenia and Italy to the south, and Switzerland and Liechtenstein to the west.

The territory of Austria covers 83,879 square kilometres (32,386 sq mi). Austria's terrain is highly mountainous, lying within the Alps; only 32% of the country is below 500 metres (1,640 ft), and its highest point is 3,798 metres (12,461 ft). The majority of the population speak local Bavarian dialects of German as their native language, and Austrian German in its standard form is the country's official language. Other local official languages are Hungarian, Burgenland Croatian, and Slovene. The origins of modern-day Austria date back to the time of the Habsburg dynasty when the vast majority of the country was a part of the Holy Roman Empire. From the time of the Reformation, many Northern German princes, resenting the authority of the Emperor, used Protestantism as a flag of rebellion. The Thirty Years War, the influence of the Kingdom of Sweden and Kingdom of France, the rise of the Kingdom of Prussia, and the Napoleonic invasions all weakened the power of the Emperor in the North of Germany, but in the South, and in non-German areas of the Empire, the Emperor and Catholicism maintained control. During the 17th and 18th centuries, Austria was able to retain its position as one of the great powers of Europe and, in response to the coronation of Napoleon as the Emperor of the French, the Austrian Empire was officially proclaimed in 1804. Following Napoleon's defeat, Prussia emerged as Austria's chief competitor for rule of a larger Germany. Austria's defeat by Prussia at the Battle of Königgrätz, during the Austro-Prussian War of 1866 cleared the way for Prussia to assert control over the rest of Germany. In 1867, the empire was reformed into Austria-Hungary. After the defeat of France in the 1870 Franco-Prussian War, Austria was left out of the formation of a new German Empire, although in the following decades its politics, and its foreign policy, increasingly converged with those of the Prussian-led Empire. During the 1914 July Crisis that followed the assassination of Archduke Franz Ferdinand of Austria, Germany guided Austria in issuing the ultimatum to Serbia that led to the declaration of World War I.

After the collapse of the Habsburg (Austro-Hungarian) Empire in 1918 at the end of World War I, Austria adopted and used the name the Republic of German-Austria (Deutschösterreich , later Österreich) in an attempt for union with Germany, but was forbidden due to the Treaty of Saint-Germain-en-Laye (1919). The First Austrian Republic was established in 1919. In the 1938 Anschluss, Austria was occupied and annexed by Nazi Germany.

This lasted until the end of World War II in 1945, after which Germany was occupied by the Allies and Austria's former democratic constitution was restored. In 1955, the Austrian State Treaty re-established Austria as a sovereign state, ending the occupation.

In the same year, the Austrian Parliament created the Declaration of Neutrality which declared that the Second Austrian Republic would become permanently neutral. Today, Austria is a parliamentary representative democracy comprising nine federal states. The capital and largest city, with a population exceeding 1.7 million, is Vienna. The country has developed a high standard of living and in 2014 was ranked 21st in the world for its Human Development Index. Austria has been a member of the United Nations since 1955, joined the European Union in 1995, and is a founder of the OECD.

Austria also signed the Schengen Agreement in 1995, and adopted the euro in 1999. World-renowned expert numismatist, enthusiast, author and dealer in authentic ancient Greek, ancient Roman, ancient Byzantine, world coins & more. Ilya Zlobin is an independent individual who has a passion for coin collecting, research and understanding the importance of the historical context and significance all coins and objects represent. Send me a message about this and I can update your invoice should you want this method. Getting your order to you, quickly and securely is a top priority and is taken seriously here. Great care is taken in packaging and mailing every item securely and quickly. What is a certificate of authenticity and what guarantees do you give that the item is authentic? You will be very happy with what you get with the COA; a professional presentation of the coin, with all of the relevant information and a picture of the coin you saw in the listing. Additionally, the coin is inside it's own protective coin flip (holder), with a 2x2 inch description of the coin matching the individual number on the COA. Whether your goal is to collect or give the item as a gift, coins presented like this could be more prized and valued higher than items that were not given such care and attention to. When should I leave feedback? Please don't leave any negative feedbacks, as it happens sometimes that people rush to leave feedback before letting sufficient time for their order to arrive. The matter of fact is that any issues can be resolved, as reputation is most important to me.

For on an overview about using my store, with additional information and links to all other parts of my store which may include educational information on topics you are looking for. The item "1765 AUSTRIA Roman Emperor Franz I Silver 20 Kreuzer Austrian NGC Coin i83712" is in sale since Sunday, April 19, 2020. This item is in the category "Coins & Paper Money\Coins\ World\Europe\Austria".