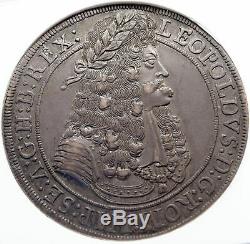 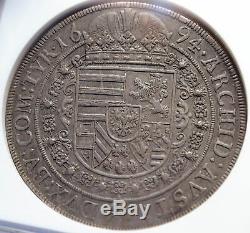 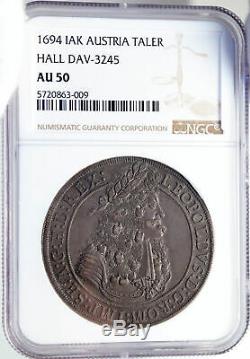 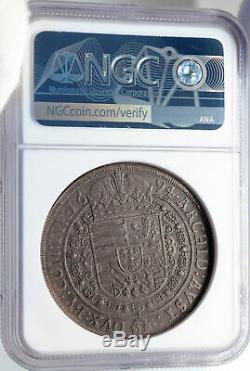 The top of the head touches the rim and divides the legend. ARCHID AVST / DVX BV COM TYR; Crowned composite arms with small shield of Tyrol at centre, chain of the Golden Fleece, beaded circle; year divided by the crown at top.

Leopold I full name: Leopold Ignaz Joseph Balthasar Felician ; Hungarian: I. Lipót ; 9 June 1640 - 5 May 1705 was Holy Roman Emperor, King of Hungary, Croatia, and Bohemia. The second son of Ferdinand III, Holy Roman Emperor, by his first wife, Maria Anna of Spain, Leopold became heir apparent in 1654 by the death of his elder brother Ferdinand IV. Elected in 1658, Leopold ruled the Holy Roman Empire until his death in 1705, becoming the longest-ruling Habsburg emperor (at 46 years and 9 months).

Leopold's reign is known for conflicts with the Ottoman Empire in the east and rivalry with Louis XIV, a contemporary and first cousin, in the west. After more than a decade of warfare, Leopold emerged victorious from the Great Turkish War thanks to the military talents of Prince Eugene of Savoy. By the Treaty of Karlowitz, Leopold recovered almost all of the Kingdom of Hungary, which had fallen under Turkish power in the years after the 1526 Battle of Mohács. Leopold fought three wars against France: the Franco-Dutch War, the Nine Years' War, and the War of the Spanish Succession. In this last, Leopold sought to give his younger son the entire Spanish inheritance, disregarding the will of the late Charles II.

Leopold started a war that soon engulfed much of Europe. The early years of the war went fairly well for Austria, with victories at Schellenberg and Blenheim, but the war would drag on until 1714, nine years after Leopold's death, which barely had an effect on the warring nations. Austria , officially the Republic of Austria (German: Republik Österreich) , is a federal republic and a landlocked country of over 8.5 million people in Central Europe. It is bordered by the Czech Republic and Germany to the north, Hungary and Slovakia to the east, Slovenia and Italy to the south, and Switzerland and Liechtenstein to the west. The territory of Austria covers 83,879 square kilometres (32,386 sq mi).

Austria's terrain is highly mountainous, lying within the Alps; only 32% of the country is below 500 metres (1,640 ft), and its highest point is 3,798 metres (12,461 ft). The majority of the population speak local Bavarian dialects of German as their native language, and Austrian German in its standard form is the country's official language. Other local official languages are Hungarian, Burgenland Croatian, and Slovene. The origins of modern-day Austria date back to the time of the Habsburg dynasty when the vast majority of the country was a part of the Holy Roman Empire. From the time of the Reformation, many Northern German princes, resenting the authority of the Emperor, used Protestantism as a flag of rebellion. The Thirty Years War, the influence of the Kingdom of Sweden and Kingdom of France, the rise of the Kingdom of Prussia, and the Napoleonic invasions all weakened the power of the Emperor in the North of Germany, but in the South, and in non-German areas of the Empire, the Emperor and Catholicism maintained control.

During the 17th and 18th centuries, Austria was able to retain its position as one of the great powers of Europe and, in response to the coronation of Napoleon as the Emperor of the French, the Austrian Empire was officially proclaimed in 1804. Following Napoleon's defeat, Prussia emerged as Austria's chief competitor for rule of a larger Germany. Austria's defeat by Prussia at the Battle of Königgrätz, during the Austro-Prussian War of 1866 cleared the way for Prussia to assert control over the rest of Germany.

In 1867, the empire was reformed into Austria-Hungary. After the defeat of France in the 1870 Franco-Prussian War, Austria was left out of the formation of a new German Empire, although in the following decades its politics, and its foreign policy, increasingly converged with those of the Prussian-led Empire. During the 1914 July Crisis that followed the assassination of Archduke Franz Ferdinand of Austria, Germany guided Austria in issuing the ultimatum to Serbia that led to the declaration of World War I. After the collapse of the Habsburg (Austro-Hungarian) Empire in 1918 at the end of World War I, Austria adopted and used the name the Republic of German-Austria (Deutschösterreich , later Österreich) in an attempt for union with Germany, but was forbidden due to the Treaty of Saint-Germain-en-Laye (1919). The First Austrian Republic was established in 1919.

In the 1938 Anschluss, Austria was occupied and annexed by Nazi Germany. This lasted until the end of World War II in 1945, after which Germany was occupied by the Allies and Austria's former democratic constitution was restored. In 1955, the Austrian State Treaty re-established Austria as a sovereign state, ending the occupation. In the same year, the Austrian Parliament created the Declaration of Neutrality which declared that the Second Austrian Republic would become permanently neutral. Today, Austria is a parliamentary representative democracy comprising nine federal states.

The capital and largest city, with a population exceeding 1.7 million, is Vienna. The country has developed a high standard of living and in 2014 was ranked 21st in the world for its Human Development Index. Austria has been a member of the United Nations since 1955, joined the European Union in 1995, and is a founder of the OECD.

You will be very happy with what you get with the COA; a professional presentation of the coin, with all of the relevant information and a picture of the coin you saw in the listing. Additionally, the coin is inside it's own protective coin flip (holder), with a 2x2 inch description of the coin matching the individual number on the COA. Whether your goal is to collect or give the item as a gift, coins presented like this could be more prized and valued higher than items that were not given such care and attention to. When should I leave feedback? Please don't leave any negative feedbacks, as it happens sometimes that people rush to leave feedback before letting sufficient time for their order to arrive. The matter of fact is that any issues can be resolved, as reputation is most important to me. My goal is to provide superior products and quality of service. How and where do I learn more about collecting ancient coins? Visit the Guide on How to Use My Store. For on an overview about using my store, with additional information and links to all other parts of my store which may include educational information on topics you are looking for.

The item "1694 AUSTRIA Holy Roman Empire LEOPOLD I Silver TALER / THALER Coin NGC i82832" is in sale since Tuesday, March 24, 2020. This item is in the category "Coins & Paper Money\Coins\ World\Europe\Austria". The seller is "highrating_lowprice" and is located in Rego Park, New York.