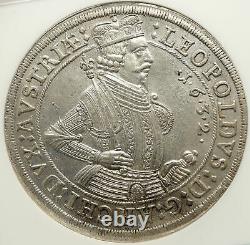 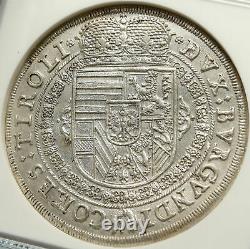 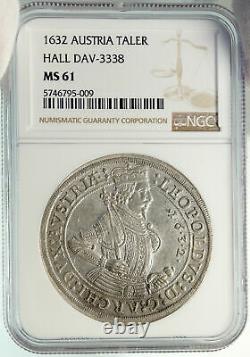 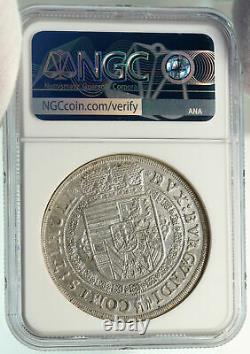 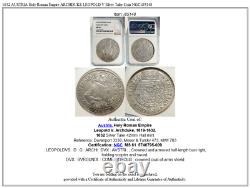 MS 61 5746795-009 : LEOPOLDVS : D : G : ARCHI : DVX : AVSTRIÆ : ; Crowned and armored half-length bust right, holding scepter and sword. DVX : BVRGUNDI : COMES TIROLIS ; crowned coat-of-arms shield. Leopold V, Archduke of Further Austria (October 9, 1586 - September 13, 1632) was the son of Archduke Charles II of Inner Austria, and the younger brother of Emperor Ferdinand II, father of Ferdinand Charles, Archduke of Further Austria. He was Bishop of Passau and of Strasbourg, until he resigned to get married, and Archduke of Further Austria including Tirol. Leopold was born in Graz, and was invested as bishop in 1598, as a child, even though he had not been ordained as a priest; he became Bishop of Strasbourg in 1607, a post which he held until 1626.

From 1609 onwards he fought with his mercenaries in the War of the Jülich succession against Maximilian III, Archduke of Further Austria in Tirol, and 1611 for Rudolf II in Bohemia. In 1614, he financed the construction of the Church of the Jesuit College of Molsheim, inside of which his coat of arms is since prominently displayed. In 1619 upon the death of his kinsman and former rival, he became governor of Maximilian's inheritance: Further Austria and Tirol, where he attained the position of a sovereign, i. Archduke of Further Austria from 1626 to his death in 1632. In 1626 he resigned his ecclesiastical positions and married Claudia de' Medici.

He had the Custom House and the Jesuit Church built in Innsbruck. He fought for the Veltlin and defended Tirol against the Swedes in 1632.

He died in Schwaz, Tirol. Austria , officially the Republic of Austria (German: Republik Österreich) , is a federal republic and a landlocked country of over 8.5 million people in Central Europe.

Austria's terrain is highly mountainous, lying within the Alps; only 32% of the country is below 500 metres (1,640 ft), and its highest point is 3,798 metres (12,461 ft). The majority of the population speak local Bavarian dialects of German as their native language, and Austrian German in its standard form is the country's official language. Other local official languages are Hungarian, Burgenland Croatian, and Slovene. The origins of modern-day Austria date back to the time of the Habsburg dynasty when the vast majority of the country was a part of the Holy Roman Empire. From the time of the Reformation, many Northern German princes, resenting the authority of the Emperor, used Protestantism as a flag of rebellion.

The Thirty Years War, the influence of the Kingdom of Sweden and Kingdom of France, the rise of the Kingdom of Prussia, and the Napoleonic invasions all weakened the power of the Emperor in the North of Germany, but in the South, and in non-German areas of the Empire, the Emperor and Catholicism maintained control. During the 17th and 18th centuries, Austria was able to retain its position as one of the great powers of Europe and, in response to the coronation of Napoleon as the Emperor of the French, the Austrian Empire was officially proclaimed in 1804.

Following Napoleon's defeat, Prussia emerged as Austria's chief competitor for rule of a larger Germany. Austria's defeat by Prussia at the Battle of Königgrätz, during the Austro-Prussian War of 1866 cleared the way for Prussia to assert control over the rest of Germany. In 1867, the empire was reformed into Austria-Hungary. After the defeat of France in the 1870 Franco-Prussian War, Austria was left out of the formation of a new German Empire, although in the following decades its politics, and its foreign policy, increasingly converged with those of the Prussian-led Empire. During the 1914 July Crisis that followed the assassination of Archduke Franz Ferdinand of Austria, Germany guided Austria in issuing the ultimatum to Serbia that led to the declaration of World War I. After the collapse of the Habsburg (Austro-Hungarian) Empire in 1918 at the end of World War I, Austria adopted and used the name the Republic of German-Austria (Deutschösterreich , later Österreich) in an attempt for union with Germany, but was forbidden due to the Treaty of Saint-Germain-en-Laye (1919). The First Austrian Republic was established in 1919. In the 1938 Anschluss, Austria was occupied and annexed by Nazi Germany. This lasted until the end of World War II in 1945, after which Germany was occupied by the Allies and Austria's former democratic constitution was restored.

The country has developed a high standard of living and in 2014 was ranked 21st in the world for its Human Development Index. Austria has been a member of the United Nations since 1955, joined the European Union in 1995, and is a founder of the OECD. Austria also signed the Schengen Agreement in 1995, and adopted the euro in 1999.

Visit the Guide on How to Use My Store. For on an overview about using my store, with additional information and links to all other parts of my store which may include educational information on topics you are looking for. The item "1632 AUSTRIA Holy Roman Empire ARCHDUKE LEOPOLD V Silver Taler Coin NGC i85148" is in sale since Sunday, July 12, 2020. This item is in the category "Coins & Paper Money\Coins\ World\Europe\Austria". The seller is "highrating_lowprice" and is located in Rego Park, New York.