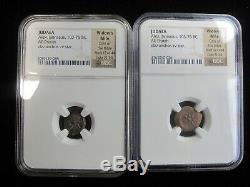 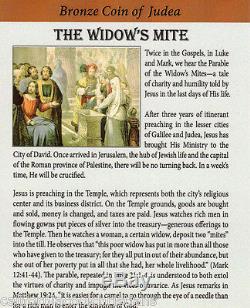 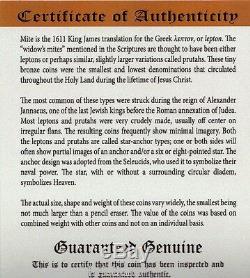 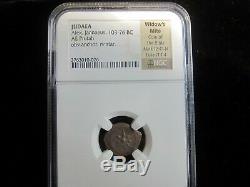 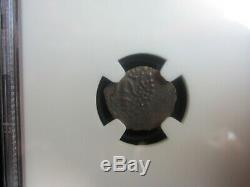 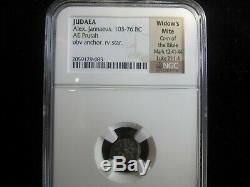 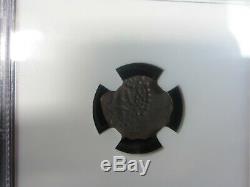 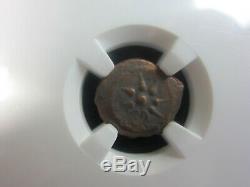 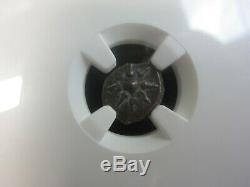 WOW - CHECK OUT THE DETAIL IN THESE ANCIENT COINS. THIS IS FOR 1 - NGC COIN AS PICTURED ABOVE.

(see photos and you decide the grade). These are the Larger Widow's Mite. I also have the smaller Judaea.

Widow's Mite for sale. Comes in a NGC SLAB. These "MITES" were the smallest and lowest denomination coin that circulated in. Most were thin and were carelessly and crudely struck. Usually off center and in small flans. The mite was the lowest Denomation coin in history. It is about 1/128 of a Denarius, and a Denarius was a day's pay for a common laborer. So if a laborer was paid 1 days wages with the Widows Mite, they would have to give them 128 Mites!! The value of the coins were based on combined weight with other coins and not on an individual coin value. Both the lepton and the prutah had the images of t. He anchor on one side and the star or wheel image on the other. THIS IS A GENIUNE BRONZE WIDOWS MITE COIN IN A PREMIUM GRADE. (see photo's and you decide the grade). BASILEWS ALEXANDROU (King Alexander) around anchor.

Eight ray star (or wheel) surrounded by diadem, Hebrew inscription Yehonatan the king between the rays. This coin is not a replica, but an actual bronze coin, certified genuine, minted in the Holy Land over 2000 years ago during the reign of King Alexander Jannaeus in the century preceding the birth of Jesus. What makes these coins of great historical and religious importance is that twice in the Bible, Jesus is quoted as telling the story of the poor widow who gave all that she had which was just two mites. The coin enclosed is identical to the type of coin she would have had.

These coins have been known to collectors for hundreds of years as Widows Mites. And there came a certain poor widow, and she threw in two mites, which make a farthing. And he called unto him, his disciples, and saith unto them, Verily I say unto you, This poor widow hath cast more in, than all they which have cast into the treasury; For all they did cast in of their abundance, but she of her want did cast in all that she had, even all her living. And he looked up, and saw the rich men casting their gifts into the treasury. And he saw also a certain poor widow casting in thither two mites.

And he said, Of a truth I say unto you, that this poor widow hath cast in more than they all: For all these have their abundance cast in unto the offerings of God: but she of her penury hath cast in all the living that she had. Although it is common to view in museums, it is a rare opportunity to actually hold an object of this age and importance in your hands. These coins typically circulated for very long periods and most specimens became. It is because of the discovery of.

An ancient hoard that a limited number of coins of this superb level of preservation are available. This Widows Mite coin is a genuine bronze coin issued by King Alexander Jannaeus, the Great Grand Nephew of Judah Macabee and the Jewish leader of the Holy Land from 103-76 B. It is this type of coin that circulated in the Holy Land during Jesus life.

The two dominant symbols that are found on the coin are an anchor and a star with 8 rays. Occasionally Greek lettering is seen on these coins around the anchor illustrating the prevalence of Greek cultural influence that was evident during Jannaeus reign. Judean coins were made by striking long, thin strips of blank metal between two dies.

The first coin on the strip was then placed between the two striking dies and hit with a hammer. The strip was then quickly pulled until the next coin was in place and the process repeated. When the strip was completed the coins were cut apart. The Widows Mite Biblical coin refers to the story of the poor widow whom Jesus Christ commended in the Temple for having given all she had, two mites. And there came a certain poor widow, and she threw in two Mites... And he called unto him his disciples, and saith unto them, Verily I say unto you, that this poor widow hath cast more in, than all they which have cast into the treasury: for all they did cast in of their abundance; but she of her want did cast in all she had.

THERE IS ALSO MENTION OF THE WIDOWS MITE IN. There are 2 different Widows Mites. Lepton Widows Mite 103-76 BC (Widows Mite lepton as mentioned in scriptures) minted under Alexander Jannaeus.

Prutah Widows Mite 103-76 BC Often currently referred to as the Widows Mite but was a larger coin with similar markings to the lepton minted under Alexander Jannaeus. These coins were minted by the Maccabees in Jerusalem and used in Jerusalem during the life of Jesus and the disciples. It was the penny of that time period and is famously mentioned in the New Testament. There are no two coins of this kind alike! They were minted by hand over 2000 years ago and were in circulation for many years, causing many Pruta and Lepton coins that are found today to be in poor condition.

The Famous "Widow's Mite", Judean bronze Prutah of King Janeaus, minted 103-76 BC. Mentioned in New Testament books, Mark and Luke, in the famous parable about a poor widow praised by Jesus for her charitable contribution of two mites... (or Parable) of the widow's mite. Is a story present in the. The Gospel of Mark specifies that a mite was worth less than a. The smallest Roman coin, implying that Mark's intended audience were more familiar with Roman culture than with Jewish. The Story of the Widow's Mites. As Jesus looked up, he saw the rich putting their gifts into the temple treasury. He also saw a poor widow put in her two mites. "Truly I tell you, " he said, this poor widow has put in more than all the others. All these people gave their gifts out of their wealth; but she out of her poverty put in all she had to live on. The Christian lesson of the widow's mites, as relayed in.

Luke (21:1-4) and Mark (12:41-44). Is an enduring testament to the value of faith. A destitute widow has only a few mites to her name, and those she gave selflessly as her donation to the Temple.

(Mites were ancient pennies, fairly worthless at the time). Jesus comments that her modest gift was worth more than the ostentatious contributions of the wealthy, for her mites represented all that she had. This virtuous woman had demonstrated true Christian faith in God -- she could not know from where her next meal would come, but she believed that He would provide for her. Seek first the kingdom of God and His righteousness and all these things (food, clothes, all material needs) will be added unto you.

This Widows Mite bronze Prutah was issued by Hasmonean King of Judea, Alexander Jannaeus (103-76BC). It circulated in the Holy Land during Jesus life. Similar coins are still today being discovered at excavations in the Holy Land. The two symbols found on the coin are an anchor within a circle, representing a diadem, and an 8 pointed star.

These symbols are derived from earlier Greek coin designs that were used in the area. When these coins were originally made, they were very crudely hand struck. Most examples show odd shapes and off-center, partial images. They were the lowest value coins of the period. I have several Biblical Widow's Mite Coins in albums and loose. In a Display Album with the Story of the coin and a. The item "1 -NGC SLABBED ANCIENT ROMAN COIN PRUTAH WIDOWS MITE in The Bible 103-76 BC" is in sale since Sunday, June 1, 2014. This item is in the category "Coins & Paper Money\Coins\ Ancient\Roman\ Republic (300 BC-27 BC)". The seller is "californiacoolchristians" and is located in california.